The alliance between Roman Catholics and evangelical Protestants on a range of issues dear to social conservatives has been one of the biggest storylines in religion and politics in recent decades.

But in the Age of Pope Francis and the Era of President Trump that union may be fraying.

In a tweet posted Monday night, Nov. 14, Jerry Falwell Jr. — a Baptist and leader of the religious right who was one of Trump’s chief promoters — delivered a pithy and pointed critique of the pontiff.

“Pope Francis lost all credibility when he failed to call out US Left for policies that impoverished inner cities 4 Dem politicalgain,” Falwell tweeted. 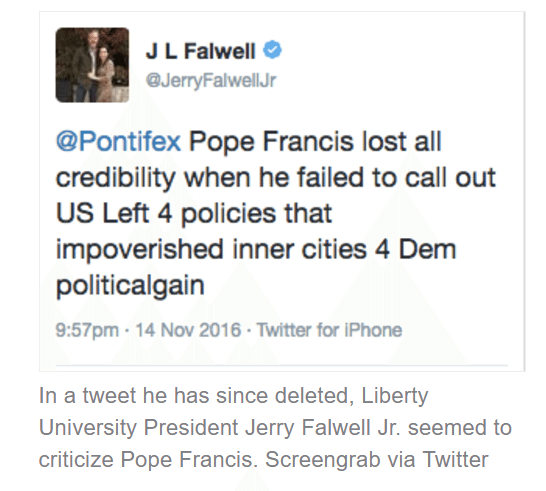 The tweet — directed at the pope’s Twitter account, @Pontifex — was almost immediately deleted. Reached by phone Tuesday by RNS, the Liberty University president said his wife, Becki, and 16-year-old daughter, Caroline, had made him take it down, something he said that happens “every now and then.”

But he stood by the tweet and said it was prompted by the pope’s comments in an interview published Friday by Italian daily La Repubblica.

Asked what he thought about the president-elect, Francis said: “I do not judge people or politicians. I only want to understand what suffering their behavior causes to the poor and the excluded.”

Falwell said his tweet should be read less as “critical” and more “thinking out loud.”

“I couldn’t help but think, ‘Where were you the last eight years when (President Barack) Obama’s policies were further impoverishing the inner cities through these welfare programs that give people just enough to survive but to keep them dependent on the government?’” he said.

“It’s my opinion the Democrats do it for their own political gain. I would like to see the pope speak out against that.”

Francis has upset many conservatives with his focus on the poor and marginalized while giving issues such as abortion and gay rights less prominence.

“I was just curious why he was taking sides. It seems like the policies of the right to bring jobs back and fair trade deals and to provide jobs to folks in poverty would be something he would cheer for or something he would appreciate,” Falwell said.

The pope and Trump also have a history. In February, when asked about the Republican’s pledge to deport illegal immigrants and build a wall at the Mexican border, Francis said that was “not Christian.”

Since the presidential election the Catholic bishops appear to be growing increasingly concerned about a Trump presidency. On the opening day of the U.S. bishops’ annual fall meeting this week, they called on the president-elect to change course and adopt humane policies toward immigrants and refugees.

But the bishops are also aware that Catholics overall voted for Trump over Hillary Clinton, 52 percent to 45 percent. That’s not as strong as the more than 80 percent of white evangelicals who backed Trump, but it may show that the alliance is still fairly solid at the grass roots.

“Jesus never told us what our political beliefs should be.”

Pope to pastors, religious: Stand with the people, no matter the risk