SHAWNEE, Oklahoma — Duncan Tiemeyer chose St. Gregory’s University because he wanted a faith-based education that would teach him more than how to succeed in a career.

The 550-student Catholic liberal arts college in Oklahoma traces its roots to French monks who moved to Indian Territory in 1875, intent on developing the bodies, minds and souls of Native American and settler children.

“Here, we are taught not only to focus on our five-year plan but also our 100-year plan and our 500-year plan,” said Tiemeyer, 22, a senior business and theology major from Houston. “What are we preparing for? Are we living our lives in a way that is getting us to the next life? Are we going to be able to go to heaven?” 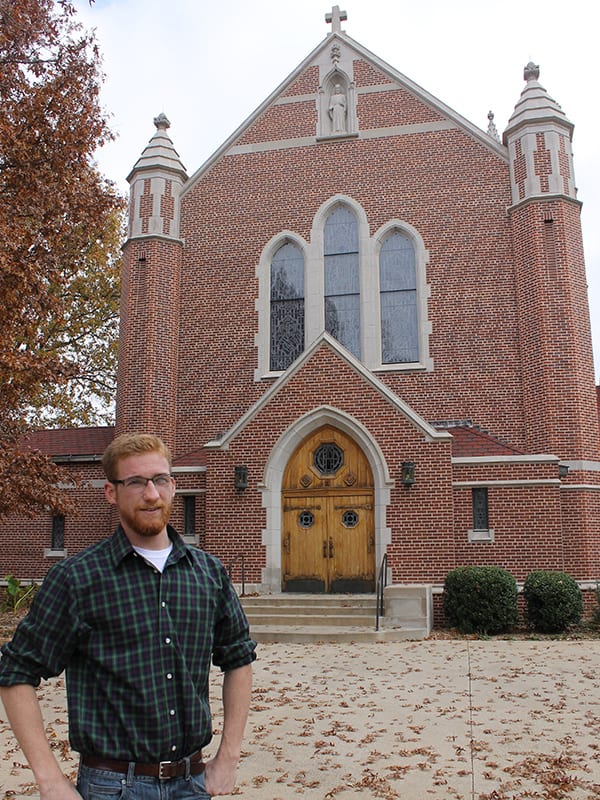 However, the brand of education offered by St. Gregory’s — where Benedictine monks still pray multiple times daily in a chapel beside a cemetery filled with the remains of their predecessors — will come to an abrupt halt at the fall semester’s end.

“It’s just a tragic and sad loss, and I’m grieving for our students and faculty and staff who are working through this loss,” said St. Gregory’s President Michael A. Scaperlanda.

“The transition from a mom-and-pop shop to a niche boutique has been difficult for many colleges,” Scaperlanda said. “In the pre-Wal-Mart world, mom-and-pop shops could survive and thrive. In the Wal-Mart world, you need to have a niche market and very sophisticated business practices, and I think that has been difficult for many small Christian universities, including St. Gregory’s.” 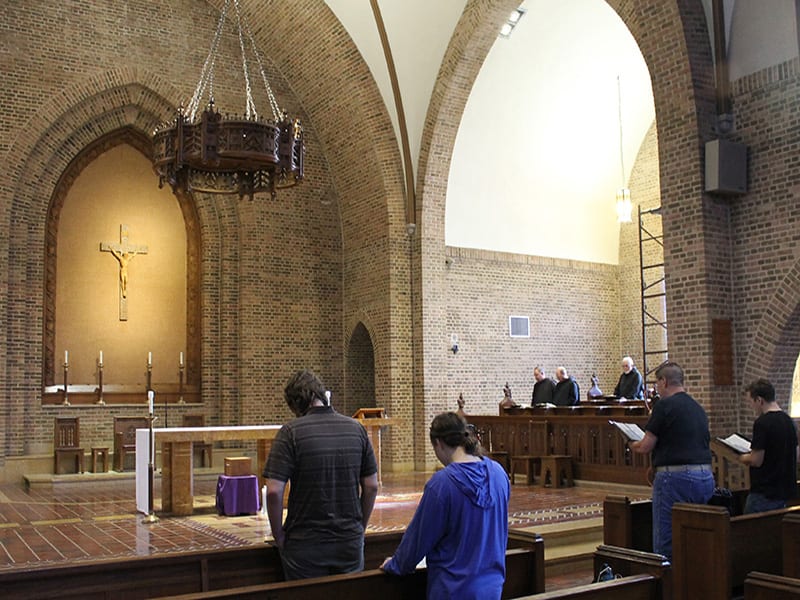 Benedictine monks welcome students and faculty members from St. Gregory’s University near Shawnee, Oklahoma, to attend the frequent prayers at the abbey church on campus. The monks plan to keep serving Oklahoma’s Catholic community even as the university closes in December. (Credit: RNS photo by Bobby Ross Jr.)

Roughly one-third of the small private colleges rated by Moody’s Investors Service generated operating deficits in 2016, an increase from 20 percent in 2013, MarketWatch reported in June.

A major reason, according to the financial information website: a record level of tuition discounts, “a practice that’s financially riskier for small colleges that have fewer sources of revenue to rely on.”

More than 60 percent of Catholic universities in the U.S. have fewer than 2,500 students, and most have “very little in the way of financial endowment,” said Paula Moore, vice president of external relations for the Washington, D.C.-based Association of Catholic Colleges and Universities.

“Particularly since the beginning of the Great Recession of 2007, many ACCU-member colleges and universities have made ongoing commitments to ensure the accessibility of high-quality Catholic education by holding tuition increases at an absolute minimum and by increasing the amount of financial aid for students,” Moore said in an email.

In 1956, 300 Catholic colleges and universities served roughly 400,000 students across the nation, according to Moore. Today, that total is closer to 200 institutions, but with double the overall enrollment, she reported.

“What that tells us broadly is that there has been a certain level of contraction among our colleges,” Moore added, “but that they continue to innovate and find ways to serve even greater numbers of students.”

Here in Oklahoma, St. Gregory’s had hoped a $12.5 million rural development loan from the Citizen Potawatomi Nation — made possible thanks to federal money dispersed to the tribe — would keep it alive.

To qualify for the loan, the Sooner State’s only Catholic university even de-annexed from Shawnee, a city of 31,000, to meet the requirement of being located in a rural area. However, the U.S. Department of Agriculture denied the loan, saying St. Gregory’s wasn’t in a rural area at the time of the last U.S. Census.

“Once the loan was denied, we were basically out of cash, and we needed to let our students find new homes quickly,” the university president said. “We couldn’t delay. There was really no time to appeal the decision of the USDA,” Scaperlanda said.

As religious colleges die, it’s society that loses out, he added.

“Students that go to a Catholic or a Protestant or even a Jewish or Islamic university — any of those faith-foundation universities — have a framework for life and can see their role as an accountant or a nurse within the context of a deeper meaning,” he said.

“We maintain our commitment to pray for all who have attended and supported St. Gregory’s over the years and will explore new ways of contributing to the culture of Oklahoma,” Stasyszen said in a statement.

News of the university’s closing — announced this month — brought shock and tears on campus, where a Christian cross sits atop the landmark Benedictine Hall, a castlelike structure built a century ago.

“I’ve been blessed with the understanding that nothing is outside of God’s providence,” said Emilia Lilly Bermudez, St. Gregory’s dean of students.

“I have to maintain calm for the sake of the students, but it’s not something that I have to fake,” added Bermudez, an immigrant from El Salvador and graduate of Catholic-affiliated Ave Maria University in Florida.

In its final weeks, the university is focusing on helping students find new educational homes, from Oklahoma Baptist University just down the street to Franciscan University of Steubenville, Ohio, a Catholic institution 1,100 miles away.

Both those universities — and a number of others, both public and private — have sent recruiters to St. Gregory’s.

As life lessons go, this one is heartbreaking for students — but it also can be a faith builder, said Meg Hunter-Kilmer, St. Gregory’s on-campus missionary.

“It’s really a tragic thing for them to lose their home and the future they had planned for themselves, but we’ve just tried to remind them that this is life,” said Hunter-Kilmer, a graduate of the University of Notre Dame in South Bend, Ind. “This specifically doesn’t happen very often, but your plans being ruined happens all the time.

“We have to learn how to move on, how to get up, how to trust that the Lord is leading regardless of whether we can see where the pillar of fire and the cloud are taking us,” she added, referring to how the book of Exodus describes God guiding the Israelites’ travels.

Tiemeyer, the Student Government Association’s president, has created a GoFundMe page with a goal of raising $15,000 to help the 110 faculty and staff members losing their jobs right before Christmas.

He’s unsure of his own future.

Tiemeyer has enough credits to graduate with his business degree. But he’s four courses short of completing his theology major. While considering whether to become a priest, he has applied to go to seminary through the Archdiocese of Oklahoma City.