Despite declines and doubts, nuns still delight in a ‘beautiful mission’

BOSTON, Massachusetts — About 80 women stood shivering in the yard before the St. Paul church in Jamaica Plain as the last rays of the orange sun were fading. A fire pit flickered in the middle of the congregation, casting dark shadows on their solemn faces.

As the veils worn by the women in the crowd swooned in a chilly wind, the only man present, a priest, chanted.

They lit their candles from the priest, lighting in turn those of their sisters. The effect was that of glittering fireflies appearing in the dusk.

The women followed the priest into the dimly lit church. One of them burst into song, the high notes of her voice as ethereal as the flames stretching toward the ceiling. When the song was finished, the candles were blown out, and the Easter vigil began.

The “graying” of religious life

The Daughters of Saint Paul are a religious order created in 1914 by Father Giacomo Alberione and Sister Thecla Merlo in Italy. Alberione believed in spreading the word of God by using all the modern means available, including radio, television and magazines. In effect, his ambition was to broadcast the Gospels.

The order, now spread in over 50 countries around the world, has been shrinking as the number of sisters falls and their ages rise. The Daughters of Saint Paul are, therefore, an example of a worldwide trend, one which calls into question whether the religious sisters’ lifestyle will be able to survive.

The “Mother House” in Boston, is the U.S. headquarters of the Pauline sisters, a community of about 80 nuns. The brown brick building has two wings that spread forming a V formation, featuring large windows and a carefully manicured garden. The chirping of the birds in the trees and the laughter of the children at the nearby public school offer a familiar soundtrack.

Inside the building is an intricate maze of corridors and hallways. The lights are often off as the nuns attempt to use every possible drop of natural sunlight. The rooms on the first floor are decorated with poofy couches, pink taffeta and potted vases. On the second floor are the bedrooms, with just enough space for one bed, a desk and a chair.

Pictures of the founders, as well as other members of a seeming Catholic Hall of Fame, look piously upon passers-by from within their frames. The telephone ringing and the buzzing sound of a stair lift going up and down rarely interrupt the general silence.

The average age of nuns in the Pauline congregation worldwide is 58. That number is much higher in the Mother House. For a long time, pushing up the median was Sister Mary Augusta Biolchini, who, at 102, was the oldest Daughter of St. Paul in the world until she died on March 29.

Biolchini had hands that felt like ancient parchment, but despite her age, she giggled like a girl when amused. The times she smiled, which were often, the lines on her face marked hieroglyphs, like a map tracing her century-old experiences. Her dentures fell sometimes, but she expertly pushed them up with a flick of her tongue. She was tiny, almost as if so many years of serving her God had pressed on her shoulders, shrinking her.

“My hearing is…” Biolchini said at one point as we spoke, making a descending movement with her hand. 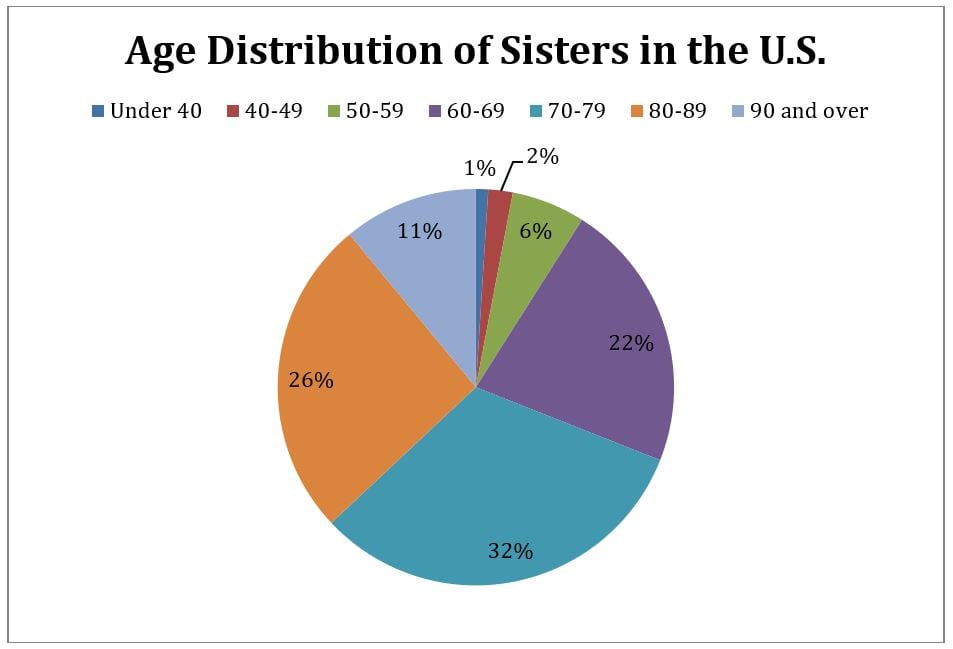 In the United States, there are more religious sisters over the age of 90 than under the age of 60. This “graying” of religious life was detailed in a Fall 2014 study by the Center for Applied Research in the Apostolate, or CARA, a national, non-profit research center based at Georgetown University.

The weight of obedience

Even though final vows usually are made only after a very long period of time, most of the Daughters of Saint Paul decided that they were going to become nuns from as early as eight years old.

The time of discernment for an aspiring nun starts with postulancy, a time for prayer and reflection that lasts about two years. Following are the stages of novitiate, juniorate and the perpetual profession. In total, the process can last 30 years.

The total median age of nuns in the United States at the time of the survey was 76. This explains why one of the main responsibilities in the convent is to take care of older sisters.

When Sister Laura Rosemary McGowan made her eternal vows of chastity, poverty and obedience at 20, she probably didn’t expect how much the final promise would weigh on her life. She was surprised when she was assigned to taking care of Mother Paula, one of the older sisters in the convent. Her only previous experience of care-giving had been studying to become a veterinarian.

“In faith and in dialogue with our superiors, we place ourselves at the service of the Church for the proclamation of the Gospel,” says the Pauline sisters’ website on the vow of obedience. For McGowan, it meant watching over an elderly and incapacitated nun.

Of Polish and Irish descent, McGowan had considered becoming a nun since she was 11. It took her a long time to find the place that she would want to call home, but eventually came across the Daughters of Saint Paul.

After the death of Mother Paula, McGowan started doing what she had become a nun to do, the evangelization of the masses. She loved going door-to-door and bringing people into her faith. She adored feeling like a part of the community.

Yet a life built around obedience means not always getting what you want, or not being able to hold onto it as long as you’d like. McGowan remembers being shocked when superiors called her to the office and told her that she was going to learn to paint.

“I could hardly do stick-figures!” said McGowan.

She recounted that those were among the darkest periods of her life – lasting about one year – when she would pray every day asking God how on earth was she going to learn to paint. The prayers paid off, she said, when during one of her morning prayers, she was filled with light and a calm certainty about her path.

“He gave me a little light and helped me move out of myself,” said McGowan. “He gave me the grace, just for the moment, and I was able to move on.”

She now spends her days in the basement of the editorial department in the motherhouse, surrounded by sketches and paintings. When asked about her feelings toward painting today, she answers, “It’s fine.”

A longing for love

Sister Kathryn J. Hermes, 55, gave the same answer regarding her life as a nun. She was 15 years old when she started her path to becoming a daughter of Saint Paul. She’s the head of the digital publishing house for the congregation, and she dedicates her life to using new media to spread the Gospel.

All the sisters also make a vow of chastity, devoting their entire bodies to Christ who in turn becomes their husband.

“I always wanted to be a nun!” said Hermes next to a life-sized poster of their co-founder Mother Techla. “I never dated or had my first kiss.”

Still, sacrificing a family and matrimony was hard for Hermes. In her thirties, she said, she began to feel a longing for love, for a family and for kids.

On one occasion the sisters went to see the movie Father of the Bride 2, a comedy about marriage and pregnancy. All the sisters laughed. Yet when the topic of having children came up, she could not help herself and cried.

“Now when I see children, I place my hand over their heads and pray for them,” Hermes said, staring into the distance.

Through their vow of poverty, nuns are required to distance themselves from all attitudes of selfishness, materialism, superiority, competition and inflexibility, along with any physical possessions.

Despite those lofty ideals, life in a convent can get difficult at times, and arguments often take place. Hermes shares her work with Sister Marie Paul Curley, who started discerning a religious life at 14. They don’t always see eye-to-eye in regards to time management and organization of the work.

“Try to imagine a house full of women!” said Curley, while sitting on a red exercise ball before her computer. “Most of the time we work it out without any drama, [but] if one of us is having a bad day, then there is more drama.”

Curley wears the typical habit of the Pauline nuns. The skirt is just above the ankle. The cut is boxy and large so as not to show the wearer’s figure. Her hair, like that of most of her sisters is cut short and tucked under a sleek, practical veil. The shoes are plain and flat. The habit serves to convey not only an idea of poverty, but also the virtue of modesty.

“Despite all the stereotypes of nuns, if you walk down the street in this,” Curley said while pointing at her habit, “someone is going to stop you and ask for a prayer or ask for advice.”

Yet the sisters’ culture of obedience, poverty and chastity risk disappearing in the near future, should present trends continue. In the United States, after a peak in 1965, the number of religious sisters has plummeted consistently every year, according to the CARA study. 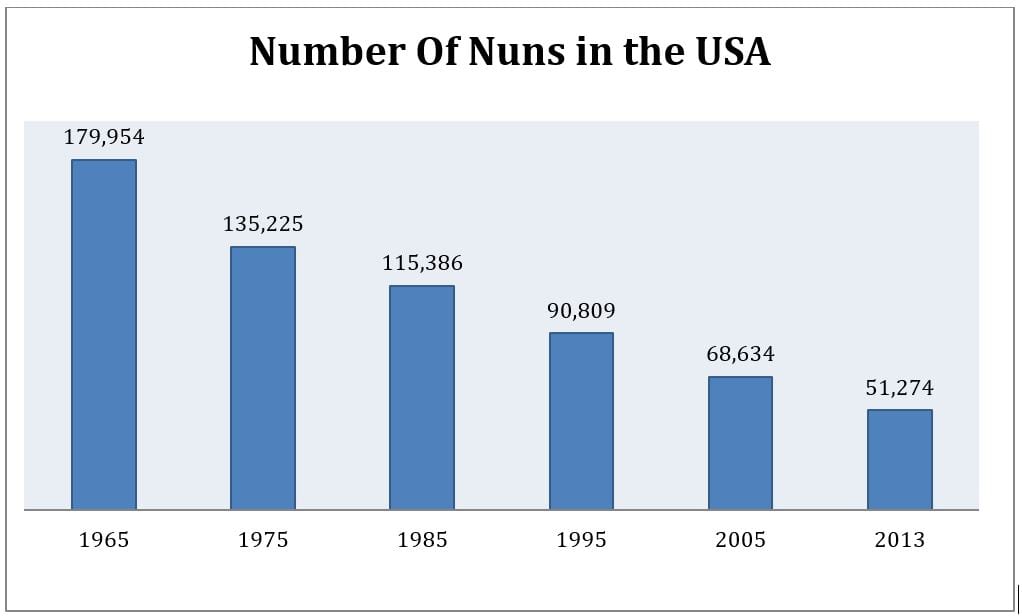 As the chart illustrates, there has been a 72.5 percent decrease in the number of nuns in the United States over a span of almost 50 years.

Globally, the total number of nuns has decreased from a little over one million in 1965 to 721,935 in 2013. Although the numbers have decreased in general, the country-by-country fluctuation varies. Asia, Africa, the Middle East and the Caribbean continue to experience sizable growth.

According to the CARA survey, the number of religious sisters will continue to shrink, though the process might slow down. The reasons young women are growing less interested in religious life are many and unclear, but the future of the convents depends on how effectively they will be able to attract the new generations.

Biolchini had been at the vigil mass, draped in blankets and holding her candle with a quivering hand, untroubled by any dark clouds on the horizon for her order or women’s religious life generally.

“I don’t feel old,” Biolchini said with a shaky voice. “Our mission is a beautiful mission.”

When the ceremony ended, she quietly lined up at the queue forming at the stair lift, and then went to bed, seeming, for all the world, to be content.

(After Biolchini died on Wednesday March 28, Sister Anne Flanagan remembered her this way on her blog: “A beautiful soul with a winning smile and a willingness to cooperate in any way she could: we are going to put her to work full time, especially for her dearest intention of vocations!”)