A new survey shows that most Americans want some limits to abortion, no matter what their political affiliation.

The 2022 American Family Survey released on Tuesday shows that only 8 percent of Americans want abortion to be legal throughout a pregnancy, while 19 percent want an outright ban.

The debate over abortion has heated up in the United States since the Supreme Court overruled the 1973 Roe v. Wade decision that legalized abortion across the country.

The American Family Survey is an annual, nationwide study of 3,000 Americans by the Deseret News and the Center for the Study of Elections and Democracy at Brigham Young University. It covers a wide range of political, social, and economic issues affecting Americans.

According to the 2022 addition, although Republicans and Democrats are divided on the abortion issue, when it comes to specific aspects of abortion legislation, they are closer than might be supposed. When polled about when an abortion should be allowed based upon trimester, the majority of both Democrats and Republicans favored limiting abortion to either the first or second trimester. 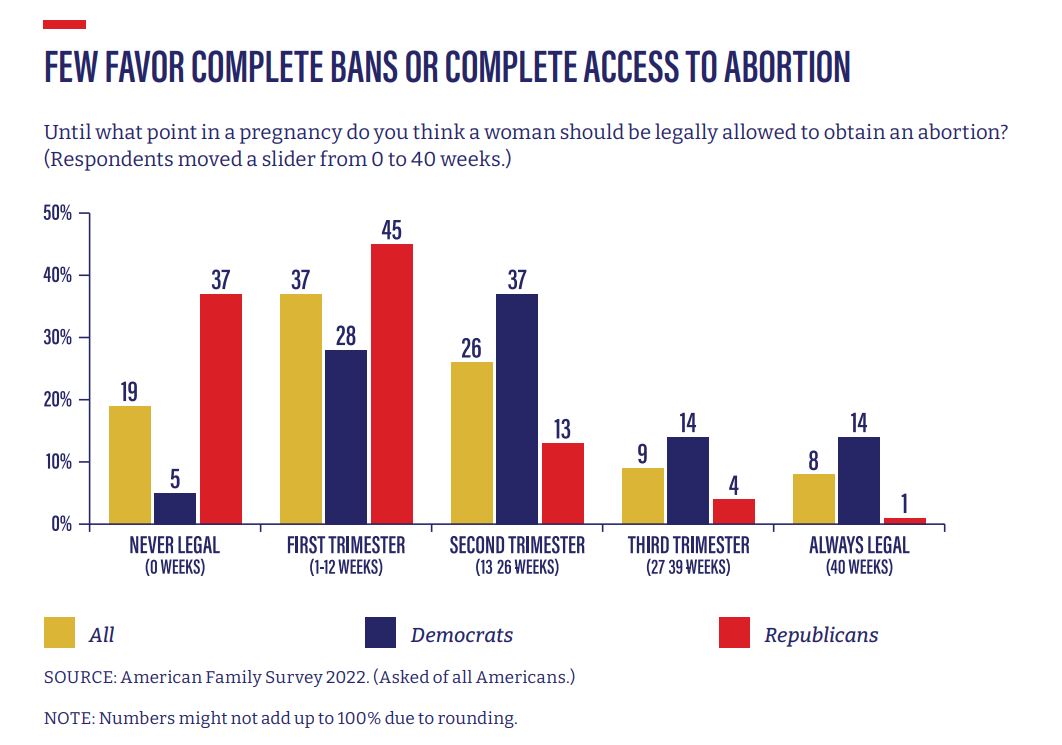 The survey also showed only a minority of both parties wanted either a total ban on abortion or legal access throughout pregnancy.

The authors of the survey note the results of the survey differ if the question is whether abortion “should be legal or illegal in all or most cases.”

“We find that about 60 percent of Americans favor abortion being legal in all (31 percent) or most (29 percent) cases, compared to 40 percent who favor it remaining illegal in all (10 percent) or most (29 percent) cases. These results are nearly identical to findings from a Pew Research Center survey fielded in the summer of 2022, and they reflect a higher percentage of Americans who favor abortion being legal in “all cases” (31 percent), compared to abortion being legal through the entire 40 weeks of a pregnancy (8 percent),” said Chris Karpowitz and Jeremy C. Pope of the Center for the Study of Elections and Democracy at BYU, the authors of the report. 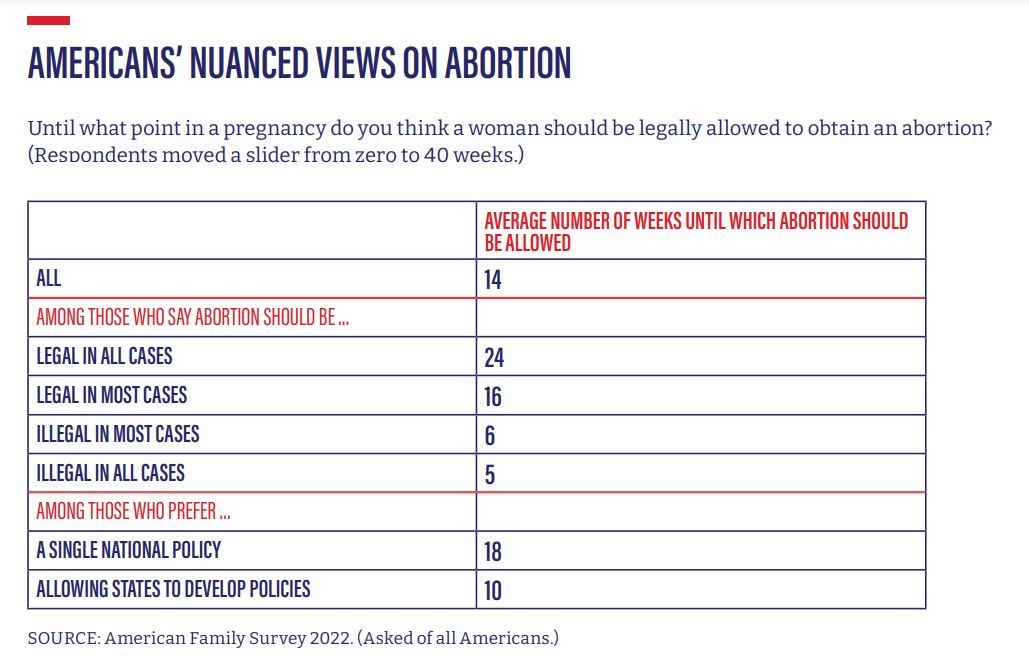 “What should we make of this difference? One possible interpretation of the discrepancy between responses to the two questions is that Americans distinguish between the timing of abortion as an option, which is the focus of the first question, and the different ‘cases’ or situations when abortion might be legal, which is the focus of the second question. This distinction becomes clearer when responses to the two questions are analyzed together.

The survey’s findings are similar to how most Western European nations legislatively resolved their abortion debates from the 1960s to the 1980s, which led to limits on when an abortion could take place. For example, the UK bans abortions after the 24th week of pregnancy, one of the most liberal regimes in Europe; most other countries ban abortions after the 12th or 14th week.

Karpowitz and Pope note that understanding the nuance in Americans’ abortion beliefs, including the variety of possibilities for facilitating or denying access to abortion, is likely to be ever more important both in the upcoming congressional elections and as more states introduce and debate abortion-related regulations.

“Often, media reports focus on the extremes of this debate — either total prohibition or access through the final days of pregnancy. But both of those positions are unpopular, as the new questions we have introduced make clear. Those who generally favor abortion access also see a role for regulatory limitations, and those who want to reduce abortion access also embrace a variety of possible exceptions,” they wrote.

“Even those who appear extreme in some survey questions turn out to be less so when we ask about different elements of abortion policy. Greater effort to both understand and communicate the complexity of Americans’ abortion beliefs could bear fruit for politicians seeking a new equilibrium on these issues. Candidates and elected officials who move solely to the extremes will miss opportunities to find a new policy that reflects the nuance and complexity the vast majority of Americans clearly embrace.”