For immigrants to the US, pope’s border visit a sign of respect

ON THE US-MEXICO BORDER – With hundreds of thousands of worshippers waiting quietly behind him for the start of his final public appearance in Mexico, Pope Francis turned his gaze momentarily across the Rio Grande, facing a crowd of a few hundred gathered here in El Paso.

The pope placed a wreath in honor of the more than 6,000 people who have died trying to cross into the United States since 1998 and prayed for them in silence. He then fixed his gaze on the crowd in the United States, who broke into Spanish chants.

“It’s seen, it’s felt, the pope is present!” they chanted, along with, “Pope, listen to us, we’re fighting with you!” He smiled and waved.

The crowd, seated across the river on white folding chairs placed on dusty ground, included undocumented immigrants living in the United States.

Among those watching Pope Francis through the 10-foot chain-link fence separating the two nations was Claudia Flores, 16, whose mother and father brought her and her four brothers to the United States illegally about 15 years ago.

“This wall is keeping us from our dreams,” she said, noting that many of her relatives were at the Mass in Juarez. Her parents are unable to see them, lacking legal permission to enter Mexico and then return to the United States.

“When [the pope] gave the blessing, my heart dropped, because I wish I could have been there with most of my family,” Flores said. 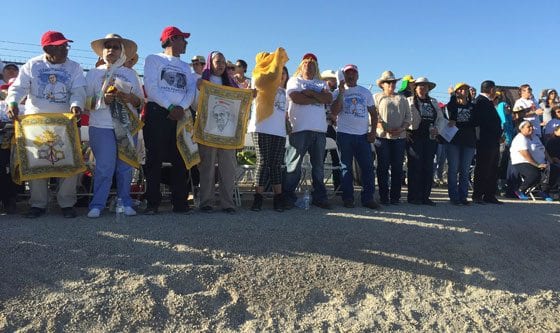 Some “Francis VIPs” stood on the banks of the Rio Grande in El Paso during the papal Mass across the border in Mexico Wednesday. (Michael O’Loughlin / Crux Staff)

Another undocumented resident of El Paso was Claudia Dias, who has lived in the United States illegally since 2000. She said the pope’s visit brought her “hope and relief.”

“I feel like he’s a messenger sent from God come to bring us hope. I think he’s going to do something big for all of us,” she said. “I hope he touches the hearts of politicians so that they understand what our lives are like, being undocumented.”

Susanna Herrera, also an undocumented resident of the United States, said the pope’s stop at the border would bring extra attention to migration issues.

“As a messenger of God here on Earth, the pope has the ability to make his voice heard in places where we cannot,” she said.

Sister Norma Pimentel, a member of the Missionaries of Jesus religious order who was also present on the levee, runs Catholic Charities of the Rio Grande Valley, which operates a respite house for migrants crossing the border in Brownsville, Texas.

Pimentel said she hopes the pope’s stop reminds policymakers that there is a “human element” to immigration, one that is often lost in the rancorous debates.

Her center provides migrants food, water, showers, and a chance to call family back home, but what they really need is adequate legal representation.

“They need to go before the court and defend themselves and they don’t even speak the language,” she said. “They need someone to help them.” 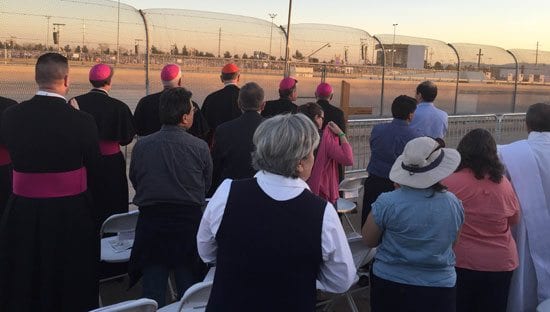 Sister Norma Pimental (foreground) and some US bishops joined undocumented immigrants on the US side of the border in El Paso. (Michael O’Loughlin / Crux Staff)

Included in the crowd were 75 undocumented minors who are in federal custody awaiting trials where their fate will be decided by a federal judge. They will be reunited with family residing in the United States or deported back to their countries of origin.

Claudia Balcorta Chaves is a program director at Southwest Key, an El Paso-based organization that runs three shelters for the minors. She said most come from Guatemala, El Salvador, and Honduras, where a surge in gang-related violence caused a mass exodus beginning in 2014.

Her organization houses 210 children ranging in age from five to 17. Those who scored a ticket to Wednesday’s event were “very excited,” she said, and the event was especially meaningful for them because they are separated from their families.

“The kids had a feeling of peace, like they were given the respect they deserve,” she said, noting that some cried during the silent blessing.

Cardinal Roger Mahony, the retired archbishop of Los Angeles, said it was those children who prompted him to watch the Mass from the US side, rather than travel into Juarez to be with the pope.

“I wanted to be on this side for the young people because they can’t go over there,” he said. Mahony, who retired in 2011, was a leader in the US Church’s push for immigration reform for decades.

He said the pope’s message is a challenge for both nations, both the drug cartels who create havoc in Juarez as well as Americans who fuel the demand for drugs.

“They wouldn’t be selling them if we weren’t buying and using them. There’s destruction on both sides of this border, human lives being destroyed through the scourge of drugs,” he said.

He said he doubts the pope’s border visit will affect US presidential politics much, but is hopeful Francis’ words might encourage those open to being challenged.

“I think it’ll impact those who have thoughtfulness, who have their eyes and ears open to the reality that we are an immigrant country, that immigrants have and continue to be a great treasure for our nation,” he said. “People running for office who downplay or denigrate the value of immigrants, it’s really sad, very sad.”

Santa Fe Archbishop John C. Wester, who also attended the prayer service on the US side, said he hopes Francis’ stop “will put a human face” on the immigration debate.

Wester said the Church in New Mexico is focused on “preventing any draconian laws from being passed,” pointing to the successful defeat of proposed legislation that would have prevented undocumented migrants from obtaining drivers licenses.

The temperature soared above 80 degrees Wednesday, breaking records in El Paso. But that didn’t stop hundreds of thousands from gathering across the river in Juarez for the pope’s final public event, a Mass, before he departed for Rome Wednesday evening. The crowd there included many people who crossed bridges in cars and on foot from the United States Wednesday morning.

Boston Cardinal Sean P. O’Malley told reporters Wednesday that the pope’s border stop is a reminder that immigrants “bring in an energy, a work ethic, and a spirit of adventure that made America a great country.”

“The pope’s visit here today is a great sign of hope for families separated and suffering,” O’Malley said.

Pope in South Sudan unleashes hope for future beyond tribalism

The Mass explained: Priest breaks down the parts of the liturgy

Theodore McCarrick will continue to be a Catholic priest