Vin Scully is back on the air, this time calling the Rosary

Baseball fans across the country were saddened at the end of an era on Oct. 3, when Vin Scully, the voice of Dodgers’ baseball for the past 67 seasons, signed off for the last time, calling the San Francisco Giants’ 7-1 victory over Los Angeles in the city by the bay.

But the man known as the voice of baseball is back, this time lending his voice to an audio recording, “The Most Holy Rosary of the Blessed Virgin Mary,” produced by the group Catholic Athletes for Christ in collaboration with Immaculate Heart Radio.

For Catholics who are baseball fans, it’s basically the answer to a prayer.

Scully – whose most famous calls include the Brooklyn Dodgers’ long dreamed of World Series victory over the rival New York Yankees in 1955, Sandy Koufax’s strikeout to complete the lefty’s perfect game in 1965, and Kirk Gibson’s 1988 World Series game-winning home run when the slugger limped around the bases on two injured legs – turned to a different kind of play-by-play for an unexpected encore.

The Hall of Fame broadcaster and devout Catholic has narrated the Joyful, Sorrowful, Glorious and Luminous Mysteries of the Rosary for the recording, which is available on CDs and digital downloads, and people can hear one of the most famous voices of the past century read Gospel passages explaining each of those mysteries and then lead the praying of the rosary.

“We are blessed and honored to have the iconic voice of Vin Scully lead this new recording of the rosary,” said Ray McKenna, the founder and president of Catholic Athletes for Christ, in a statement announcing the recording’s late September release.

“…There is no better storyteller alive today than Vin Scully, and his narration on this recording helps bring alive the stories of the birth, life, death and resurrection of Jesus Christ.” 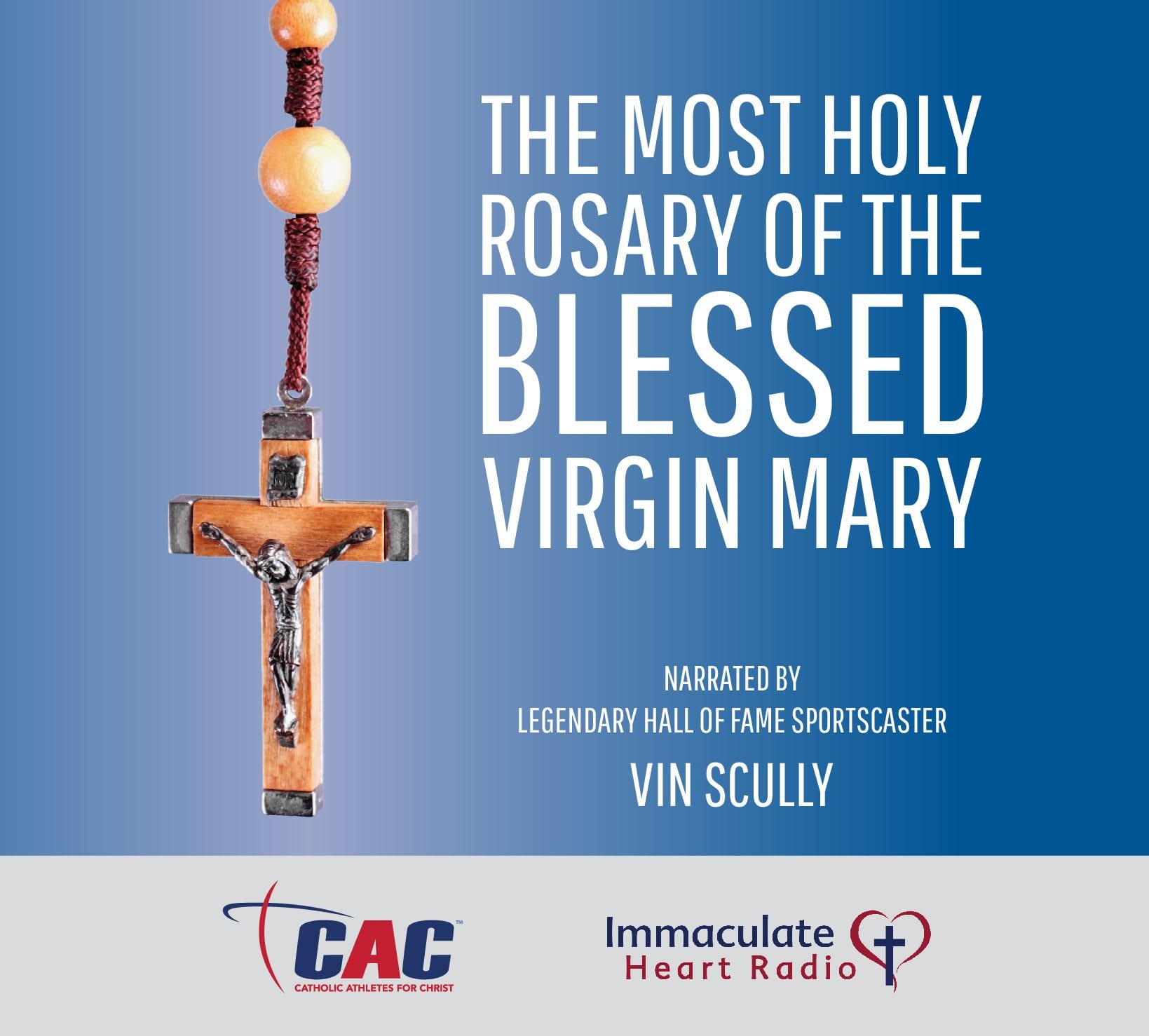 Kevin O’Malley, the Major League Baseball Ministry Coordinator for Catholic Athletes for Christ who served as an executive producer for the project, told Crux that it will allow both longtime and new fans of Scully to hear the Gospel story  “come alive with his voice and incredible talent. It’s the greatest story ever told, by the greatest storyteller.”

And he said the timing could not be more providential.

“Everything happens on God’s time, not our time,” he said, noting the original goal was to have the recording ready for the All Star break in July but it wasn’t ready to go until September, so they announced its release just after Scully’s last home game at Dodgers Stadium.

“In retrospect, the timing (of the recording’s release) was perfect, considering the tremendous outpouring of love to Vin by fans worldwide at the end of the regular season and the start of October, which is the month of the rosary,” O’Malley said.

Scully’s broadcast of the Los Angeles Dodgers’ last home game this season on Sept. 25 had a storybook quality that could have been scripted by Hollywood – or Heaven. Each Dodger who came to bat during the game first took off his batting helmet and held it upward toward the broadcast booth, in tribute to Scully.

With two outs in the bottom of the ninth, the Dodgers’ star rookie shortstop Corey Seager belted a home run to right field to tie the game. Then in the 10th inning, L.A.’s unheralded reserve shortstop Charlie Culberson lofted his first home run of the season to the left field seats to win the game.

Before the Dodgers retreated to the clubhouse to douse one another with champagne, they assembled on the field, and all doffed their caps towards Scully, who offered thanks and farewell to them and the fans.

But accounts of Scully’s final home game broadcast in Los Angeles, and his finale in the booth one week later in San Francisco, also mentioned that the announcer had begun each day by attending Sunday morning Mass in the stadium.

That relates to the rosary recording project, because Catholic Athletes for Christ has been sponsoring Catholic Masses for Major League Baseball since 2006 and now has regularly scheduled Mass at 26 of the 30 stadiums on homestand weekends.

“The Dodgers Mass on Sunday mornings in the press room is very important to many in the Dodgers organization, but especially to Vin,” O’Malley said. “Not only did he attend each and every Mass, he served as our first reading lector.”

Catholic Athletes for Christ – which works to support Catholic professional athletes in deepening and sharing their faith and also has programs for Catholic high school and college athletes – approached Scully with the idea of narrating a rosary recording to raise funds for the group’s outreach.

O’Malley said the broadcaster has been a longtime supporter of CAC and “as always, his immediate response was, ‘Whatever you need.’”

One day in March, Scully arrived at a small recording studio in Los Angeles, and within four hours, he had recorded the narration for all 20 mysteries of the rosary. He was joined by a group of nine responders, who joined him in completing the rosary prayers that he began.

O’Malley said the broadcaster carried it off with his trademark professionalism and required only about two re-takes, and he said Scully expressed several times how honored and humbled he was to help with the project.

Immaculate Heart Radio, which owns and operates more than 30 Catholic radio stations on the West Coast, recorded and engineered the production.

The recording begins with Scully reading excerpts from the 2002 apostolic letter on the rosary written by St. John Paul II, who called it his favorite prayer.

“By its nature the recitation of the rosary calls for a quiet rhythm and a lingering pace, helping the individual to meditate on the mysteries of the Lord’s life as seen through the eyes of her who was closest to the Lord,” Scully said, quoting the papal document.

While some people’s recitation of the rosary can be done in a monotonous or rote way, with Scully, each Hail Mary, Our Father, Glory Be and Apostle’s Creed seems to be heartfelt, as if each prayer mattered, just as each pitch and each at-bat mattered in his baseball broadcasts.

The same is true for Scully’s readings of the Gospel accounts of the Annunciation, and Christ’s Nativity, Last Supper, Crucifixion, Resurrection and Ascension.

In a summer of many accolades, Scully received the Gabriel Personal Achievement Award from the Catholic Academy of Communications Professionals at the Catholic Media Conference in St. Louis in June. The award, named for the angel who announced Mary’s role in bringing Christ to the world, went to the beloved baseball announcer who could not attend because he was broadcasting a Dodgers’ game.

In a recorded message to that group, Scully, with typical humor, asked that a photo be taken of all the priests and nuns in attendance, so he could take it with him on Judgment Day and hold it up and say, “I’m with them.”

In a Sports Illustrated cover story by Tom Verducci, Scully had related how his Catholic faith has carried him through life, from his boyhood attending Mass at the Church of the Incarnation in the Washington Heights neighborhood of New York City, to his Jesuit education at Fordham University in the Bronx, to his present parish, St. Jude the Apostle in Westlake Village, California.

That faith had helped him through the joys of his life, and also the sorrows, which included deaths of family members and broadcast partners.

Tom Hoffarth in an article in the Los Angeles Daily News published on the weekend of Scully’s last broadcast of a Dodgers’ home game noted that the broadcaster said, “I just want to be remembered as a good man, an honest man, and one who lived up to his own beliefs.”

With the rosary recording, people who over the years listened to Scully on their transistor radios and on their radios at home and in the car, and on TV broadcasts, can now pray along with him, on their commute to and from work, or while relaxing or working out at home.

For Catholic sports fans who will never forget Scully’s call of Gibson’s home run – “She is gone!” – the rosary CD offers his narration of three words – “Full of Grace” – that record his sincere prayer to Mary, and are words that many would say sum up the broadcaster’s life and work.

And as the baseball playoffs unfold in October, the month of the rosary, they are happy to hear his voice again.

(The audio recording of “The Most Holy Rosary of the Blessed Virgin Mary” narrated by Vin Scully is available for purchase at www.catholicathletesforchrist.org/rosary or can be downloaded from most major digital distribution sites, including Apple iTunes, Amazon Music and Google Play.)

US watchdog urges special attention to anti-Christian carnage in Nigeria