NEW YORK — Following President Donald Trump’s plans to deport “millions” of undocumented migrants, the United States Conference of Catholic bishops (USCCB) released a statement acknowledging that nations have a right to protect their borders, while urging attention toward the root causes of migration.

That response sparked an online fury that continued through last weekend criticizing the bishops’ reaction as tepid and lacking the moral outrage merited by the situation.

“We recognize the right of nations to control their borders in a just and proportionate manner. However, broad enforcement actions instigate panic in our communities and will not serve as an effective deterrent to irregular migration,” wrote Bishop Jose Vásquez, bishop of Austin and chair of the USCCB Committee on Migration in a statement on Saturday.

“Instead, we should focus on the root causes in Central America that have compelled so many to leave their homes in search of safety and reform our immigration system with a view toward justice and the common good. We stand ready to work with the Administration and Congress to achieve those objectives,” said Vásquez.

“During this unsettling time, we offer our prayers and support to our brothers and sisters, regardless of their immigration status, and recognizing their inherent dignity as children of God,” he concluded.

In response, Church historian and theologian Massimo Faggioli tweeted: “This is worse than saying nothing.” 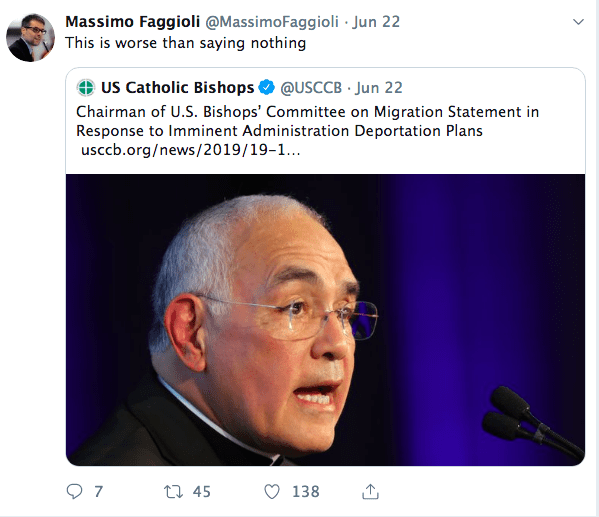 Despite an initial tweet in which the president said he planned to deport “millions,” administration officials have already admitted that they lacked the means to do so, although the agency affirmed that plans were in the works for a massive round-up of undocumented workers in major cities across the country.

By Saturday afternoon, the president announced that the plans had been halted due to what he says are hopes for a bipartisan agreement for the “Asylum and Loophole problems at the Southern Border.”

“If not, Deportations start!” Trump warned.

Once the bishops’ released their official statement, the floodgates opened, releasing a litany of criticism spanning the political spectrum.

Moral theologian Meghan Clark tweeted that the statement failed to respond with the “prophetic call required by this moment” and Christian ethicist Marcus Mescher released a series of tweets in which he urged Catholic parishes to open their doors for undocumented migrants who feared deportation. 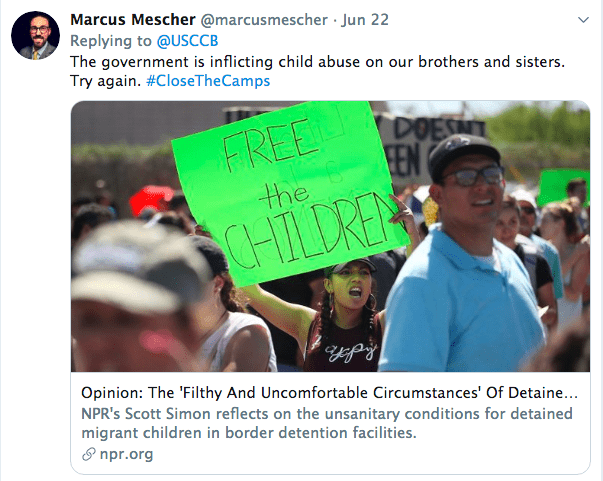 Other Catholic commentators chimed in to offer financial support for ICE officials should they feel morally compelled to leave their jobs.

While Vásquez was unavailable for an interview on Monday, the USCCB’s executive director of Migration and Refugee Services (MRS), Bill Canny, told Crux that the statement from Saturday expressed concern about the administrations round-ups and deportations as the bishops have repeatedly stated.

“When we received confirmed reports of the planning for deportations we sent out a message to the Justice for Immigrants network with advice to both people concerned with being deported and those in our community who consistently help those in such situations. These resources are available in both English and Spanish,” he said in a statement to Crux. “The alert to our network concerned resources on ‘know your rights,’ family preparations for a possible apprehension, and connecting with community resources including the local parish.”

Canny said that the “greatest concern” of the bishops’ conference “was that families would again be separated by such actions and that even children who are U.S. citizens would be detached from their parents and guardians.”

“We also know that the communications system that is supposed to inform asylum seekers who are released into our country after they have passed a credible fear interview about where they need to be for an ICE check or a court appointment can be confusing,” he continued. “The system is not always correct and people can be deported, as we have seen, by mistake. Further, such round-ups can be harmful for individuals and families who are suspected of being undocumented and in the vicinity during the carrying out of deportation orders. All of this can and should be avoided by fixing our laws through the enactment of immigration reform.”

Canny reiterated that the bishops make statements on a range of issues and seek to keep open the lines of communication.

“We have had meetings with current administration officials from the government regularly concerning policies and planned actions as was the case last week. We have written private letters to pertinent officials and the White House on these matters,” he said.

“Many bishops and Catholic officials maintain relations with local ICE officers as well as with CBP officials along the border. These relationships are designed to keep dialogue open and provide further means to influence the policies and actions of the government.”

To date in 2019, the USCCB has issued over a dozen migration-related statements, and since the election of Trump it has become a dominant issue for the conference as a whole despite being crippled by the wave of clergy sex abuse scandals.

One longtime Catholic immigration advocate told Crux that the USCCB seemed to be trying to strike a balance between defending migrants and not alienating administration officials because of other concerns, namely that of abortion, while also unsure of how to regain their public witness.

“On the immigration issue, the U.S. bishops have historically been unfairly criticized by some on the Catholic right as not supporting the rule of law and almost encouraging undocumented migration,” the individual said. “I think the statement responds to this criticism by reinforcing the right of a sovereign to enforce its laws, but should more explicitly spell out the horrific impact raids have on the family unit, particularly children.”

The immigration advocate told Crux the Trump administration has used family separation as “a political weapon” to advance their anti-immigration agenda.

“The bishops should point this out and continue to oppose enforcement tactics that devastate families and traumatize children. The majority of Catholics and the American public would agree with them.”

Crux is dedicated to smart, wired and independent reporting on the Vatican and worldwide Catholic Church. That kind of reporting doesn’t come cheap, and we need your support. You can help Crux by giving a small amount monthly, or with a onetime gift. Please remember, Crux is a for-profit organization, so contributions are not tax-deductible.

From colonial ally, church in Congo becomes an ‘institutional critic’