Latest
Russia blocks roads to the Vatican, both literally and diplomatically

[Editor’s Note: This is part two of a Crux interview with Mark Riebling on his book Church of Spies: The Pope’s Secret War Against Hitler. Part one of Gerald Korson’s conversation with Riebling appeared yesterday.]

Mark Riebling is an American historian and policy analyst who has researched and written on matters of national security and terrorism.

In his new book, Church of Spies: The Pope’s Secret War Against Hitler (Basic Books, 2015), he turns his meticulous attention to the whole matter of Pope Pius XII and what he really did – or did not do – during Hitler’s ascendancy and in the face of the evils perpetrated by the Nazis and Fascists in the Second World War.

Digging deeply into the Vatican’s archives and other documented sources, Riebling reveals how Pius XII, far from practicing silent indifference to what was happening, was busily waging his own war against Hitler through clandestine efforts to undermine his objectives and even to oust him from power.

Crux recently interviewed Riebling about his book, his research, and his conclusions regarding the controversy over Pope Pius XII.

You had access to the written transcripts of meetings in the pope’s private library that Pope Pius had secretly recorded — meetings that sometimes involved German officials, diplomats, or Church leaders. What do these transcripts reveal about the Pope’s concern and involvement in opposing Hitler?

Riebling: These transcripts reveal, above all, that Pius XII’s leadership style, especially on German issues, was exactly the opposite of how it’s been characterized by John Cornwell and other critics of the Church.

Pius was not a rigid “centralizer,” forcing Rome’s transnational will on recalcitrant national bishops. If anything, he was a flexible “localizer,” who listened very, very closely, to what the bishops on the scene were telling him. He then decided to let those who were on the scene, and closest to the problem, decide how to deal with it. 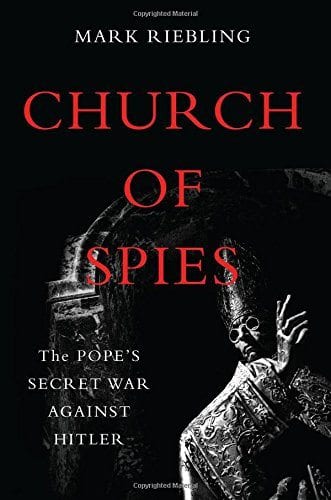 Your research finds that the pope was active in covert operations to defeat Hitler, even in plots that ultimately sought to assassinate him. What were some of the operations the Pope supported and/or directed?

Well, first, I want to be very careful here. Pius XII was involved in plots to change the German regime, rather than to kill Hitler. The documents show very clearly that both the plotters and the pope went well out of their way to avoid implicating the Vatican directly in political violence. The Holy Father didn’t put out a “hit” on Hitler, like a Mafia don.

That said, Pius XII was a veteran diplomat, and no schoolboy. I don’t think he was under any illusions that Hitler would personally survive these coups d’état.

The pope supported three of these coup plans. The first, from 1939 to 1940, aimed to end the war before Hitler invaded France. It collapsed because a lone-wolf communist nearly killed Hitler in a November 1939 bombing, and the SS imposed new security policies which denied the German military plotters access to explosives.

The second plot, which culminated in March 1943, failed because a bomb planted on Hitler’s plane failed to explode. The fuse froze when the plane climbed to a high altitude to evade Allied flak.

In the third plot, familiar to many through the Tom Cruise movie Valkyrie, Catholic Colonel Claus Schenk von Stauffenberg wounded Hitler by detonating a briefcase bomb in a staff meeting. But Hitler survived — and the resulting crackdown decimated the German-Catholic resistance.

In each of these plots, Pius XII acted as the German plotters’ foreign agent. He managed their contacts with the Western allies and their intelligence services.

I’d stress that Pius was not merely a passive relayer of information; he was an active conspirator. He took the initiative to call midnight meetings with British agents at the Vatican, pushing them to take seriously the German plotters’ plans. In fact, as British Foreign Office records show, Pius’ personally vouching for the plotters’ anti-Nazi credentials was the key factor in London’s 1940 agreement to back the plots.

Your book underlines several heroes of the Resistance and the anti-Nazi movements, but I’d like to focus upon three of them — Father Robert Leiber, Josef Muller, and Father Alfred Delp. What was their significance, as well as their relationship and level of contact with Pope Pius?

Father Leiber was the Pope’s “man Friday” — some called him the Pope’s “evil twin” — he was a very mysterious gray eminence, who chain-smoked, and had no formal title at the Vatican, but who saw Pius every day and had advised him on German affairs since the 1920s.

As early as 1938, the SS had received reports that Leiber’s greatest personal wish was for the death of Adolf Hitler. That he became the pope’s “cutout” or intermediary with Hitler’s would-be assassins was logical enough. After the US occupied Rome in 1944, American intelligence found that Leiber knew more about the plots to kill Hitler than anyone else outside Germany.

Josef Muller, known by the colorful nickname “Joey Ox,” was an ordinary German Catholic thrust into extraordinary circumstances. On the surface, he was just a Munich lawyer and book publisher, who puffed a pipe and collected stamps; but he became, as the SS put it, “the best agent of the Vatican intelligence service in Germany.”

He was wily and crafty, intrepid — the Odysseus of the German Resistance, and also its “traveling salesman.” He personally built and ran the Munich-Freising episcopal intelligence service out of his law office. He ferried reports of Nazi atrocities to Rome by flying a single-seat sports plane over the Alps to Merano, whence a Vatican agent would carry them down the peninsula to the Holy See; and Leiber then hid these reports in a hollowed-out book, on the top shelf of the papal library.

During the war, Muller traveled to Rome at least 150 times, according to CIA records, to coordinate Hitler’s removal with Leiber and other Vatican officials. It was Muller who relayed the German plotters’ advice not to call out the Nazis publicly. In April 1943, Muller was arrested for his role in a scheme to rescue German Jews by giving them false papers and money. On April 8, 1945, the SS led Muller to the gallows.

German Jesuit Father Alfred Delp worked to mobilize mass support for a post-Nazi government. To that end, Delp organized resistance cells among former leaders of Catholic labor unions. Most fatefully, however, Delp was also a liaison to Colonel Stauffenberg — and met with him on D-Day to discuss Hitler’s removal.

After Stauffenberg’s plot failed, the SS printed a wanted poster for Delp and other German Jesuits involved in the plot. Delp kept a pistol in his rectory drawer, and had a plan to escape through a secret door in the rectory wall, but the SS arrested him one day after he said Mass. In February 1945 they hanged him.

One of Delp’s sayings, I think, stands as a call to action even today, and I used it as the epigraph for the book: “How do we represent our beliefs? Merely as system — or as glowing fire?”

What did you learn in regard to Pope Pius’ actions in protecting Jews from the Nazis and Fascists?

I didn’t deal with this directly or deeply, except to note how many Italian Jews survived and how many died; and that Jesuits in Rome had hidden many Jews, as they explained to one German officer, “for the same reason we’ll soon be hiding you.”

That is to say, there was this Catholic tradition of sanctuary, which is scanted in the literature on the war, but which was a given. We see it now, very strikingly, in Pope Francis’ remarks on refugees.

Previous scholars, especially secular and Jewish scholars, presume that Pius knew little about the hiding of Jews in Vatican properties, but knew a lot about the hiding of German government officials in these same properties after the war — as part of the famous “ratlines” that helped some Germans escape to Latin America. Catholic apologists, by contrast, presume that Pius knew little about hiding Nazis, but a lot about hiding Jews.

As I read the evidence, Pius did not involve himself too much in the details in either case, but certainly tried to err on the side of offering sanctuary to refugees without passing a priori judgments on their character. This is a Europe with dozens of millions of uprooted people, of whom eventually several hundred were later convicted of war crimes after years of trials.

But in the one case where it became clear that a Catholic bishop, the Austrian Alois Hudal, was helping to hide known suspected war criminals in Rome, Pius reprimanded him and pointedly denied him a cardinal’s hat. As a result, Hudal bore Pius a grudge.

Later, as the primary source for Rolf Hochhuth’s 1963 fictional work, The Deputy, Hudal launched the attacks on Pius which continue today.

In summary, then, is it at all accurate or fair to describe Pope Pius XII as “Hitler’s Pope,” as John Cornwell did in his 1999 book of the same name?

It’s mostly inaccurate and unfair to call Pius “Hitler’s Pope.” Even Cornwell has retracted that characterization. But there’s one part of the criticism that I think is somewhat fair generally — though it’s not fair to Pius XII in particular.

Namely, it’s that the Gentile moral order mostly failed the Jews. Not only during the Nazi years, but, in fact, for a long time before then. And even for non-Catholics — perhaps especially for non-Catholics — the pope is the symbol par excellence of that Gentile moral order. So the phrase “Hitler’s Pope,” while factually false, is going to feel right to millions of people, at a core level, because it goes to a deeper truth.

Fixating, however, on the alleged Nazi sympathies of this one pope, who hated Hitler, and tried to remove him, has for too long distracted and diverted the discourse. It’s distorted our picture of how the world’s greatest moral institution met the worst moral crisis in history.

That picture, I strongly feel, should include not just what the pope didn’t publicly say, but what he secretly did do — and, above all, how these public and secret stances shaped each other. And that’s the tragic-heroic epic of Catholic resistance that I’ve tried to bring to life in Church of Spies.

Word on Fire to combat ‘hidden genocide’ of Down Syndrome, people with disabilities

Zelenskyy unveils crackdown on churches in Ukraine loyal to Moscow