A look at what was saved, what was lost in Notre Dame fire

A look at what was saved, what was lost in Notre Dame fire

Some were lost to humanity forever in the blaze that ravaged the Paris cathedral Monday. Others were spared, at least in part, or saved before the flames consumed the roof and spire.

A look at what is known about Notre Dame’s treasures and their fate.

Regarded as the cathedral’s most sacred relic, Paris Mayor Anne Hidalgo says the Crown of Thorns was saved. It is purported to be a relic of the crown placed on the head of Jesus Christ at his crucifixion, obtained and brought to Paris by King Louis IX in the 13th century. It is made of rushes wrapped into a wreath and tied with gold filament. Since 1896 it has been kept under glass and only occasionally displayed. Paris Deputy Mayor Emmanuel Gregoire said it was among pieces quickly transported to a “secret location” by officials after the fire. Hidalgo also said on Twitter that the tunic of St. Louis, a long shirt-like garment from the 13th century and believed to have belonged to King Louis IX, was also rescued.

In this Friday March 21, 2014 file photo a crown of thorns which was believed to have been worn by Jesus Christ and which was bought by King Louis IX in 1239 is presented at Notre Dame Cathedral in Paris. Paris’s mayor, Anne Hidalgo, said a significant collection of art and holy objects inside the church had been recovered from the fire at Notre Dame cathedral. In a tweet later, she thanked firefighters and others who formed a human chain to save artifacts. “The crown of thorns, the tunic of St. Louis and many other major artifacts are now in a safe place,” she wrote. (Credit: Remy de la Mauviniere/AP.)

Fragment of the Holy Cross and Nail

The 9.45-inch piece of wood and 9-centimeter-(3.5-inch)-long nail are purported to be from the cross on which Jesus Christ was crucified. The wood fragment is kept in a glass case. The fate of the two relics is not known. 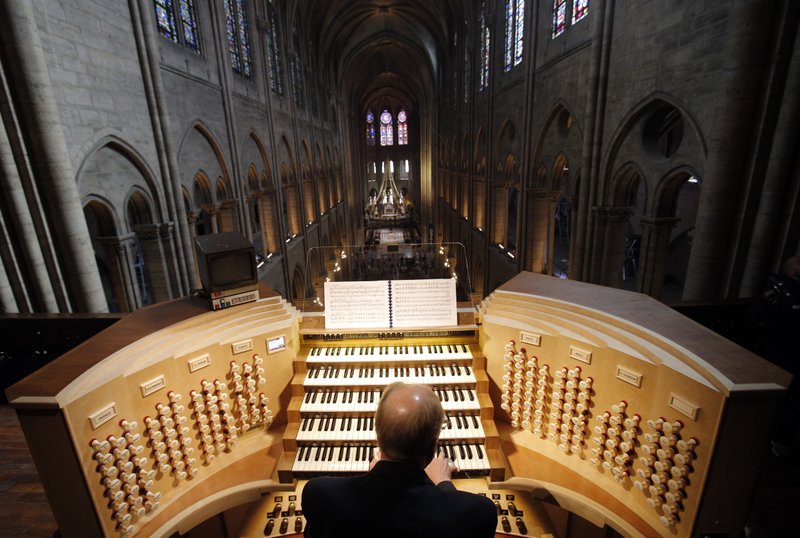 Philippe Lefebvre, 64, plays the organ at Notre Dame cathedral in Paris in May 2013. (Credit: Christophe Ena/AP.)

The impressive organ dating to the 1730s and boasting an estimated 8,000 pipes did not burn and is intact, but nobody knows yet whether it was damaged by the heat or water. “The organ is a very fragile instrument,” Bertrand de Feydeau, vice-president of the Fondation du Patrimoine which protects France’s cultural heritage, tells The Associated Press. He says the organ has “incredible” sound, with “very rich colors,” and there is a waiting list of more than two years of organists wanting to play it. Each pipe was individually cleaned during a 2013 refurbishment.

The cathedral’s roof was built using a lattice of giant beams cut from trees in primeval forests in the 12th and 13th centuries. Experts say France no longer has trees big enough to replace the ancient wooden beams that burned in the Notre Dame fire. Feydeau told France Info radio that the cathedral’s roof cannot be rebuilt exactly as it was before the fire because “we don’t, at the moment, have trees on our territory of the size that were cut in the 13th century.” He said the restoration work will have to use new technology to rebuild the roof.

In the wake of the French Revolution, the cathedral was declared a “Temple of Reason” as part of an anti-clerical movement. All of the original bells were destroyed and replaced — except for one, called Emmanuel and weighing 13 tons. In 2013, as the cathedral celebrated its 850 years with a refurbishment, nine huge new bells replaced the 19th-century ones. The peal of the cathedral’s bells has long been famous. Quasimodo was the cathedral’s bell-ringer in Victor Hugo’s 1831 novel “The Hunchback of Notre Dame.” The extent of any damage to the bells and their support structure is unclear.

About a dozen large paintings of religious scenes, called “Mays” and dating from between 1630 and 1708, hung in Notre Dame. French Culture Minister Franck Riester says the cathedral’s greatest paintings will be removed starting Friday. “We assume they have not been damaged by the fire but there may be damage from the smoke,” he said. 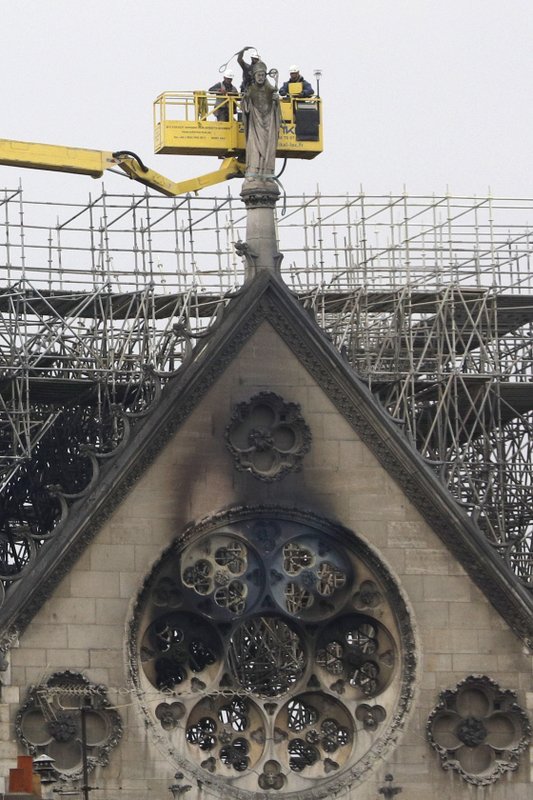 Experts prepare to lift a statue from the damaged Notre Dame cathedral after the fire in Paris, Tuesday. (Credit: Kamil Zihnioglu/AP.)

Last week, 16 religious statues got a lucky escape from Monday’s blaze: they were removed from the top of Notre Dame for the first time in over a century to be taken for cleaning. The removal was part of a restoration of the cathedral’s towering spire, now gone. The 3-meter-tall copper statues represent the 12 apostles and four evangelists.

The cathedral’s three famed rose windows date to the 13th century. The director of the United Nations cultural organization says it’s too early to tell whether they are unscathed. Audrey Azoulay tells The Associated Press art experts haven’t yet been able to assess the site yet after the blaze, though she has received encouraging reports. Notre Dame is part of a UNESCO heritage site.

The glass windows are pictured inside the damaged Notre Dame cathedral in Paris, Tuesday, April 16, 2019. Firefighters declared success Tuesday in a more than 12-hour battle to extinguish an inferno engulfing Paris’s iconic Notre Dame cathedral that claimed its spire and roof, but spared its bell towers and the purported Crown of Christ. (Credit: Christophe Petit Tesson, Pool via AP.)

to keep delivering the best in smart, wired and independent Catholic news.