People walk past parts of Mardi Gras floats past and present, at Mardi Gras World, where Kern Studios creates and stores some of their floats, in New Orleans, Friday, Feb. 12, 2021. New Orleans' annual pre-Lenten Mardi Gras celebration is muted this year because of the coronavirus pandemic. Parades canceled. Bars closed. Crowds suppressed. Mardi Gras joy is muted this year in New Orleans as authorities seek to stifle the coronavirus's spread. And it's a blow to the tradition-bound city's party-loving soul. (Credit: Gerald Herbert/AP.)

“This year, it’ll be heartbreak,” said Virginia Saussy, a member of the Muses parade “krewe” whose home, like many along a major parade route, usually overflows with people this time of year. “I think that people have to realize how unusual it is to have this pause in our culture.”

Mardi Gras, or Fat Tuesday, is the annual pre-Lenten bash celebrated along much of the Gulf Coast — with the biggest celebration in heavily Catholic New Orleans. Last year’s revelry is now believed to have contributed to an early surge that made Louisiana a Southern COVID-19 hot spot.

This year, bars are being forced to close during the final weekend of the season, which began Friday. Parades that generally start 12 days before the big day have been stilled. Mayor LaToya Cantrell is promising a crackdown on large crowds. 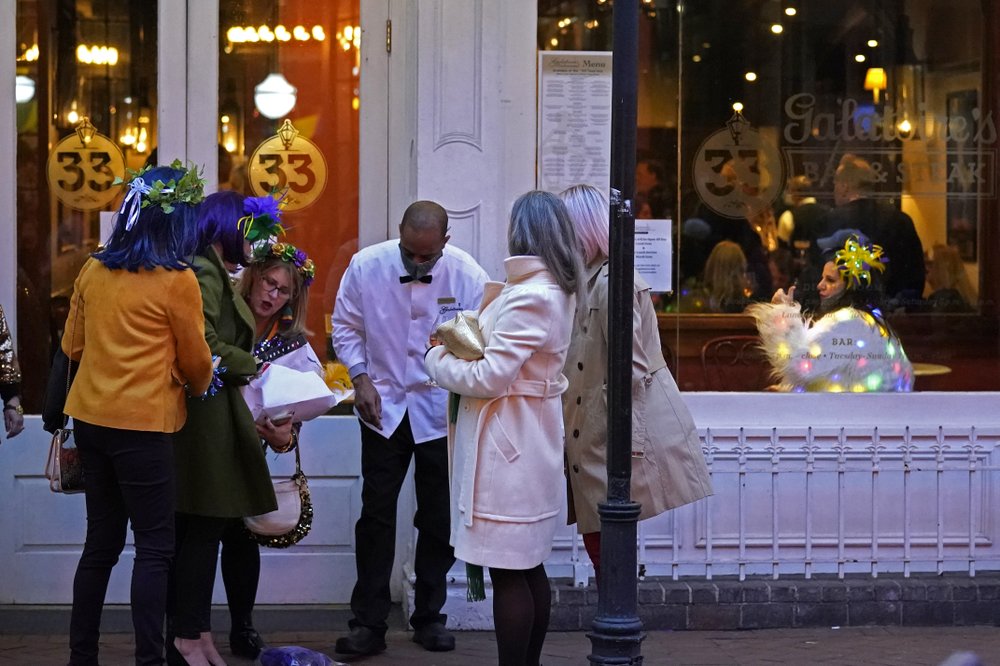 For Saussy, it means no kid-before-Christmas anticipation of her annual ride in the Muses parade, where she and other members of the all-female krewe toss repurposed high heels — decorated with paint and glitter to become prized parade souvenirs — to the throngs lining the parade route.

For Elvin King III, a trumpet player with the Warren Easton Charter High School Band, it means missing his favorite part of the parades: marching under a freeway overpass and hearing the music thunder off the concrete walls.

“I think everybody looks forward to the last year of marching because I wanted to go with a bang.” Then he adds in a quiet voice: “But, things happen.” 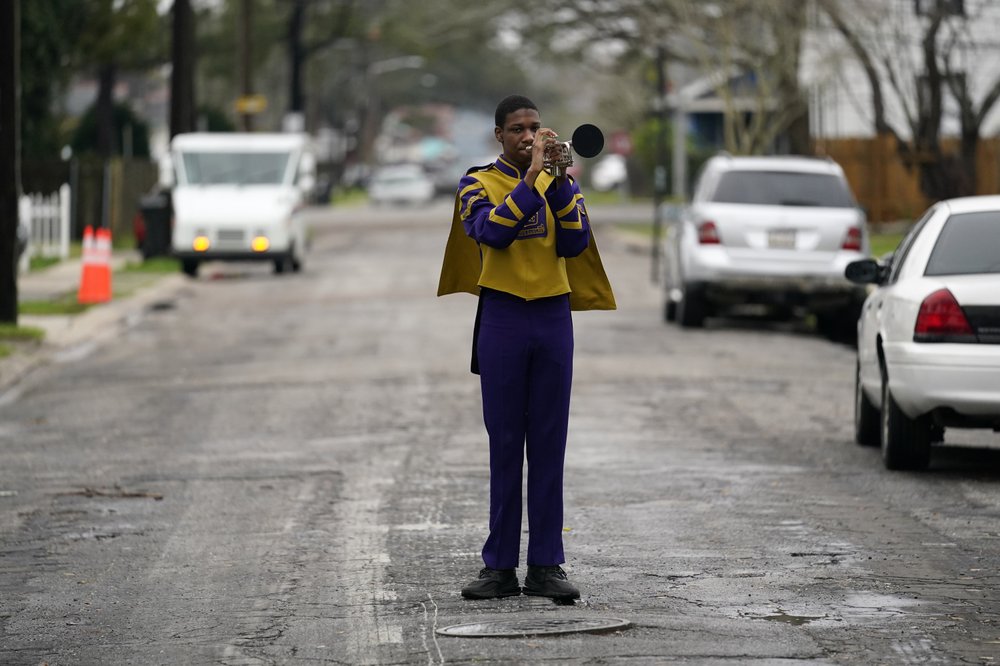 That mix of disappointment and resignation is everywhere.

“It won’t be the same. We’re in a different world,” says Bruce “Sunpie” Barnes, a local musician who, most years, dons skeleton garb and leads similarly clad marchers on an early Mardi Gras morning march through the Treme neighborhood.

“I grew up as a kid, chasing all the parades,” says James Reiss, a bank executive and official of the Rex Organization, the 150-year-old club known for elaborate Carnival season balls and its annual selection of a prominent New Orleans man to serve as Rex, King of Carnival. Nobody is being tapped for the role this year and the Rex parade is canceled.

“We’re not mad about it. It just is what it is. The mayor’s doing what she has to do to keep the citizens safe,” Reiss said. “Mardi Gras in its entirety is satirical. We’re not really kings and queens. We’re doing this in the spirit of satire and celebration. None of it is worth putting people’s lives in danger.” 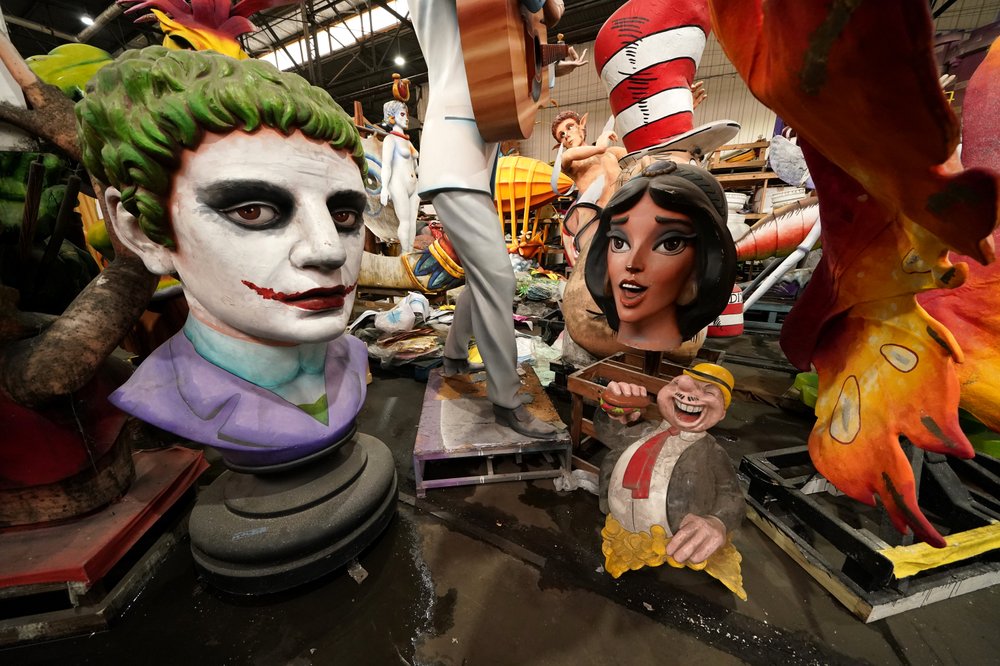 New Orleans’ Mardi Gras has had hard times before. The parade schedule was abbreviated and processions rolled past piles of flood debris in 2006, six months after levees gave way during Hurricane Katrina. In 1979, parades were canceled — or moved to suburbs — due to a police strike.

“But people could still party,” says local magazine publisher and historian Errol Laborde. Now, says Laborde, “There’s so much you cannot do. You can’t go to a neighboring parish. You can’t go anywhere in the world because it’s worldwide.”

Some locals are making the best of it, decking their houses like parade floats. A giant carton of popcorn, huge lollipops and a Paul Bunyan-sized ice cream cone are among the decorations on one two-story “house float” aptly titled “Snacking in Place.” Meanwhile, motorists can drive by an array of idled floats at New Orleans’ City Park.

And, like many aspects of pandemic life, some of the experience is moving online. For instance, nola.com, the website of The Times-Picayune/The New Orleans Advocate, planned to stream a program of local celebrities, chefs and artists Friday, Saturday and Sunday night. And the Rex Organization plans a Fat Tuesday “Salute to the People of New Orleans” that will be carried Tuesday morning by local TV stations and livestreamed. 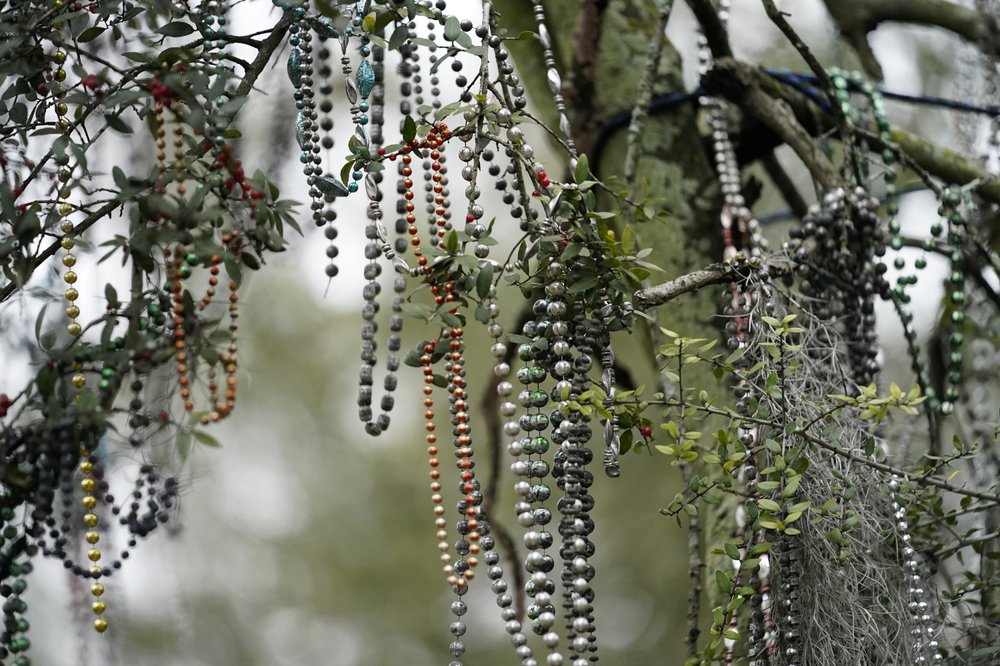 Taking a long view, tourism officials are making efforts to stress safety for those who do come to this year’s muffled Mardi Gras, while showcasing the house floats and online attractions to keep the city on the mind of future post-pandemic tourists. And some believe new practices borne of coronavirus necessity will become traditions.

“This house float thing, I can see it spreading to all kinds of neighborhoods, and the neighborhoods having parties,” Laborde said. “I think this could really develop into something big.”

As for this year, Jay Banks, a city council member and former king of the Zulu Social Aid and Pleasure Club, begun by Black laborers more than a century ago, says he’ll miss the 2021 parade.

“But I’m smart enough to know that missing it now means I can enjoy it later,” he said. “And I’m looking forward to enjoying it for many, many more years.”