“Politics is ultimately a result of culture, and religious faith lies at the very heart of culture” – that’s writer/director David Naglieri’s take on the relevance today of Pope John Paul II’s extraordinary role in toppling the Soviet regime.

That story is told in the new documentary Liberating a Continent: John Paul II and the Fall of Communism, which was released to public television early this month and is available for purchase online.

Produced in an executive capacity by Carl Anderson, Supreme Knight of the Knights of Columbus, and narrated by Jim Caviezel (Passion of the Christ, Person of Interest), the film utilizes extensive historic footage and an impressive lineup of interviews.

Voices include prominent political and Church leaders, such as Andrzej Gwiazda, vice president of Solidarity from 1980-1981; Cardinal Stanislaw Dziwisz, longtime aide to Pope John Paul II and now archbishop of Krakow; and Richard Allen, national security adviser to the Reagan administration in the early 1980s.

But the film’s appeal should reach beyond Soviet-era history buffs or those already familiar with this aspect of John Paul II’s papacy. (Full disclosure: I contributed to some of the early research for the film, though last weekend was the first time I’d seen the finished project). 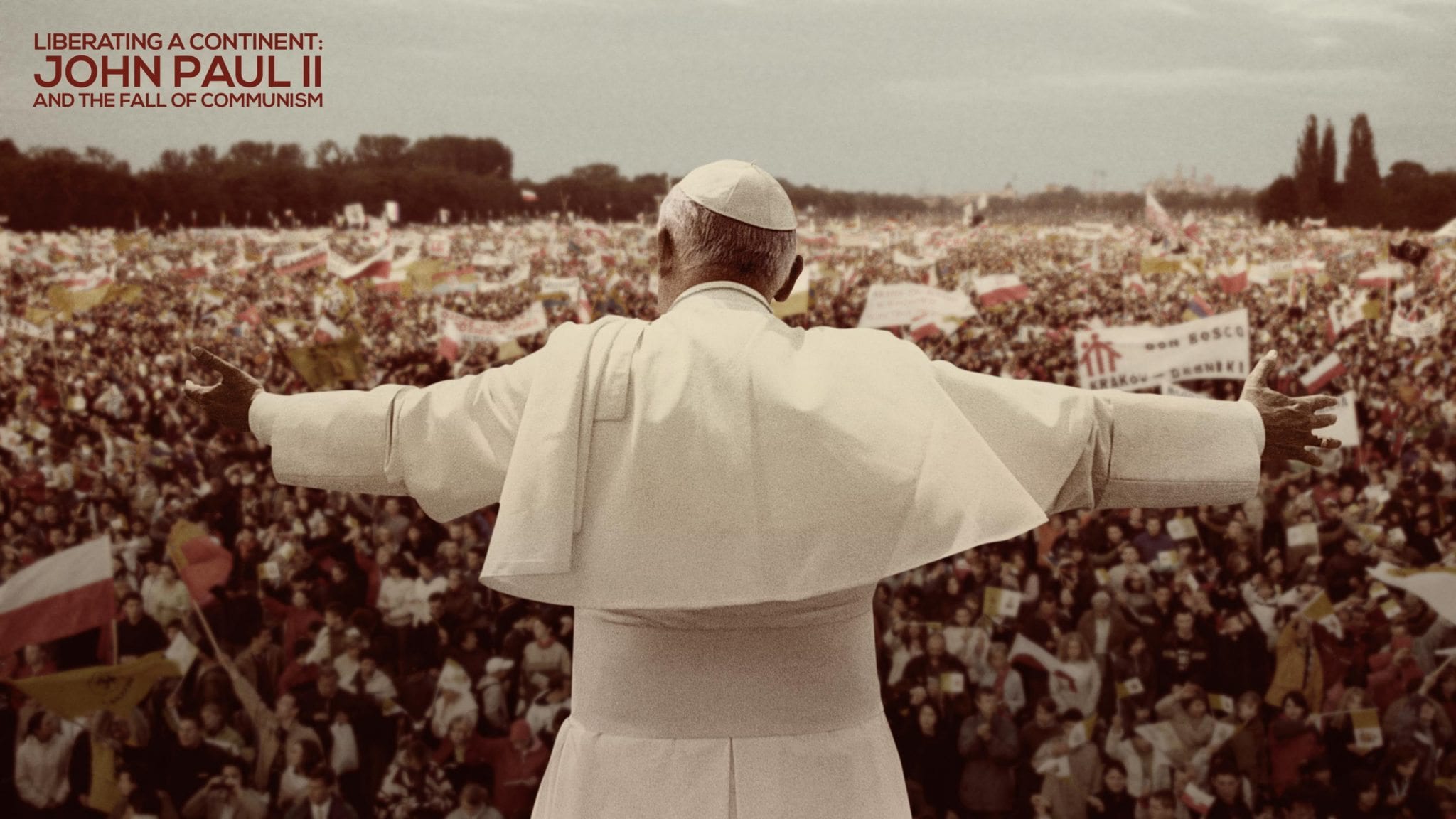 Quickly drawn in by the fast-paced narrative and original score (Joe Kraemer, Mission Impossible: Rogue Nation, Jack Reacher), I found myself pondering the imminent relevance of one man who stood at the brink of an era fraught with unrest – political and religious repression, economic despair, the threat of war – and by the courage of his convictions, helped topple the first domino that brought down the Berlin Wall.

I was struck by how profoundly John Paul II’s witness speaks to our anxieties today.

Namely, that it’s not an option to simply disengage from political and worldly affairs, just as we can’t pin our hopes on any candidate or platform. But first and foremost, from his days as a pastor long before he rose to the College of Cardinals and eventually the papacy, Karol Wotyla was passionate about creating and fostering oases of Christian culture in the midst of an atheistic regime.

Whether it was supporting young married couples in their vocation, despite the Communists’ anti-family policies; spearheading the construction of a church and celebrating open air Midnight Masses in the Krakow suburb that was supposed to be the epitome of Soviet industrialism; or bringing youth groups to the mountains for hiking, prayer and song – Wotyla carved out zones of freedom in which men and women felt emboldened to reclaim their dignity and the rich religious heritage infused in Polish culture.

And they remembered – when the hundreds of thousands in the crowds started singing “We want God” in the face of by-then hapless authorities, and when the shipyard workers of Gdansk began the strike of 1980 that birthed Solidarity – it was because John Paul II had captured their hearts for Christ.

Szymon and Justyna Czyszek, co-producers of Liberating a Continent, weren’t even born when John Paul II returned to Poland for the first time in 1979, yet that national memory left an indelible mark on their childhoods and, later, their adult faith as they raise three young children in Krakow.

“For us, he truly was someone close, like a friend,” said Justyna. Now a lawyer, she says her teenage years were formed by the exhortation John Paul II gave Polish youth in his 1987 visit: “Demand of yourselves, even if no one else demands of you.”

Szymon believes John Paul II’s message for modern Poland would still be, “Do not be afraid. Open wide the doors to Christ.”

“There are still so many areas … that need our openness to Christ,” Szymon said, pointing out that it was first the pope’s “revolution of consciences” that brought political and social change.

A revolution of consciences – and prayer.

Naglieri said a highlight from the filming was when the crew was given the chance to pray in the private chapel of the archbishop of Krakow – the same chapel where Karol Wotyla was ordained a priest in 1946, and where he would spend hours in contemplative prayer, often lying prostrate before the Eucharist. It was a powerful reminder, Naglieri said, that “ultimately, it was prayer and faith that collapsed the Soviet Empire.”

“John Paul’s intense dedication to prayer and union with God … imbued him with the conviction that communism could be defeated,” he said. “In a sense, one could argue that the first domino in the fall of communism took place in that chapel.”

On a more personal note, another reason I think I was so moved by the film is that lately, in a mere week’s span of gut-wrenching news – rape, shootings, terror, and the daily reminders of our deeply fractured nation – I’ve been longing for heroes for my children.

I’m hungry for spiritual giants I can point to and say unequivocally, “This is what courage, faith and compassion look like. This is what they can do.”

One man, on his knees. Through building friendships, championing the oppressed, and always upholding the dignity of each human being, he lit a fire in Polish hearts, changing the trajectory of the entire nation.

And the rest is history.

Elizabeth Hansen is a freelance writer from Connecticut, where she lives with her husband and three young children.

In Ordinary Time, the buzzword is ‘discipleship’

At Christmas, God has seen our brokenness and comes to us