An Ebola outbreak in the Democratic Republic of the Congo is “deeply concerning” for the bishops of the country, especially since the disease has been found in Mbandaka — a city of 1.2 million people.

The outbreak of the deadly hemorrhagic fever was confirmed in the Bikoro area in Congo’s Equateur Province on May 8.

The virus – which killed over 11,000 people during a 2014 outbreak in West Africa – has no cure, and has an overall fatality rate of over 50 percent, although some strains of the disease are much deadlier.

Bikoro is a market town with a population of under 8,000 located on the shores of Lake Tumba in the northwestern part of the country, near the border with the similarly named Republic of Congo.

The Ministry of Health confirmed the disease was found in Mbandaka, the provincial capital of Equateur, on May 17.

“The arrival of Ebola in an urban area is very concerning and WHO and partners are working together to rapidly scale up the search for all contacts of the confirmed case in the Mbandaka area,” said Dr. Matshidiso Moeti, the World Health Organization’s Regional Director for Africa.

The international body is also warning nine neighboring countries, including the Republic of Congo and Central African Republic, that they are at high risk of having the disease cross their borders. 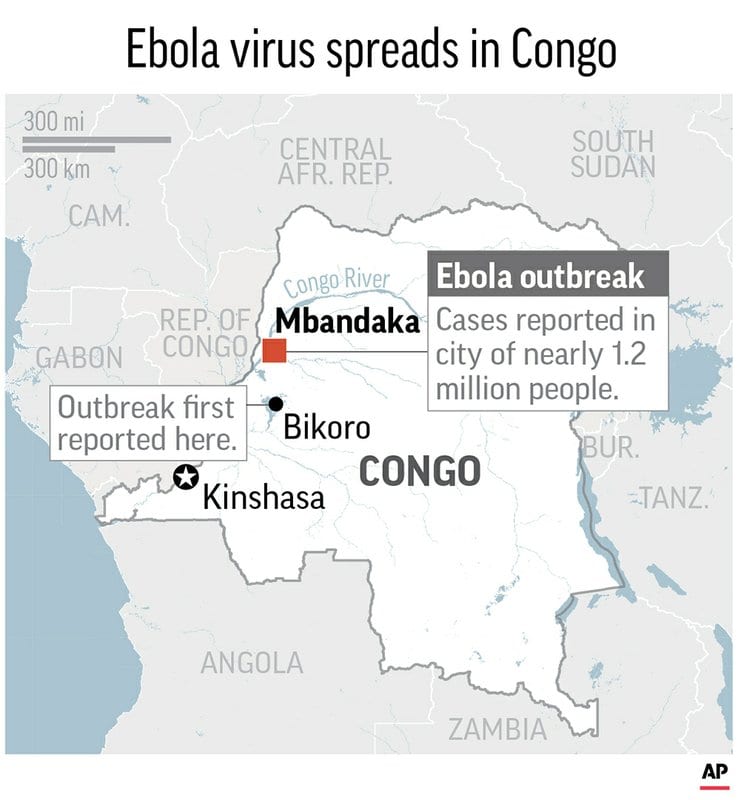 So far, over 40 people have been diagnosed with Ebola, and at least 20 have died.

In a May 18 statement, Archbishop Marcel Utembi Tapa of Kisangani, the president of the country’s bishops’ conference, said the bishops wished to “express our solidarity and fraternal closeness” to Archbishop Fridolin Ambongo Besungu – the Coadjutor Archbishop of Kinshasa currently serving as the Apostolic Administrator of the Archdiocese of Mbandaka-Bikoro – as well as all the people of God who are in the affected region.

Utembi said the bishops were particularly worried about the spread of the disease to Mbandaka, due to its size.

“Due to the nature of the disease and lack of information, the risk of its spread in this city of nearly 1.2 million inhabitants and in other cities is to be feared,” the archbishop said.

“Several elements of concern may amplify this deadly epidemic whose fatality rate ranges from 20 percent to 90 percent. The threat of the Ebola outbreak is therefore to be taken seriously at the provincial, national and regional levels,” he said.

Ebola is considered endemic in the Democratic Republic of Congo, and this is the country’s ninth outbreak of the disease since the discovery of the virus in 1976.

The last Ebola outbreak happened in 2017 in the northern Bas Uele Province, but was quickly contained.

“Dear brothers and sisters affected by this epidemic, even the most serious difficulties must not throw us into resignation and despair,” Utembi said in his message.

“Putting our confidence in God, the source of all consolation and true healing, the bishops’ conference invites the population of Mbandaka in general – and the population of Bikoro, Ikoko and Impenge in particular – to facilitate the work of the experts and to observe the rigorous protective measures against this disease,” the archbishop said.

“The bishops’ conference also urges the population not to give in to fear and the stigmatization that might hinder the response to the epidemic,” he continued.

Utembi also praised the work of the World Health Organization in rapidly responding to the crisis, calling it an example of “international solidarity.”

Nearly 4,000 doses of an experimental vaccine, which had promising results during a 2016 outbreak of the disease in Guinea, have already been sent to the country.

“Our current estimate is we need to vaccinate around 8,000 people, so we are sending 8,000 doses in two lots,” Peter Salama, WHO’s deputy director-general for emergency preparedness and response, told Reuters in Geneva.

In his message, Utembi said he was praying “that the Lord will help us to finally eradicate this deadly disease.”

“We commend to the mercy of God the victims of this epidemic, reassuring the sick and the whole population of Equateur province of our compassion and our solidarity,” the archbishop said.

Latest
Russia blocking a road to the Vatican in Rome?: Last Week in the Church with John Allen Jr.

Russia blocking a road to the Vatican in Rome?: Last Week in the Church with John Allen Jr.