A former chief of staff for the U.S. bishops’ Committee on Doctrine, and a current member of the Vatican’s International Theological Commission, has written Pope Francis to say that his pontificate “has given those who hold harmful theological and pastoral views the license and confidence to come into the light and expose their previously hidden darkness,” which, one day, will have to be corrected.

While expressing loyalty to Francis as the “Vicar of Christ on earth, the shepherd of his flock,” Capuchin Father Thomas Weinandy nevertheless charges that the pope is:

“In recognizing this darkness, the Church will humbly need to renew itself, and so continue to grow in holiness,” Weinandy wrote in the letter, which is dated July 31, the feast of St. Ignatius Loyola, founder of the pope’s Jesuit order.

While covering some of the same ground, Weinandy distanced himself from a recent “filial correction” of Pope Francis issued by a group of scholars and theologians over what signatories described as “heretical positions” that they claimed the pope has “effectively upheld.”

Weinandy said he was not invited to sign the letter, had only “heard rumors” of it, and would not have signed if asked.

“I don’t think it was theologically helpful, or presented in an effective manner,” he said.

Although the concerns in Weinandy’s letter are broadly familiar, his background affords him a degree of prominence.

He served as Executive Director of the Secretariat for Doctrine and Pastoral Practices of the United States Conference of Catholic Bishops from 2005 until 2013. Among other things, Weinandy played a key role in a controversial March 2011 bishops’ review of Fordham theologian Elizabeth Johnson, which led to a finding that her book Quest for the Living God “does not accord with authentic Catholic teaching on essential points.”

In 2014, Weinandy was named to the International Theological Commission, the main advisory body to the Vatican’s Congregation for the Doctrine of the Faith, by Francis, who also gave him the Pro Ecclesia et Pontifice medal in recognition of service to the Church in 2013.

In comments to Crux, Weinandy insisted that he did not write his letter in any official capacity, and he alone is responsible for it.

“I don’t think anyone can, or should, associate my letter with the USCCB or the American bishops,” he said. “Neither was involved in my writing the letter, and its publication will be news to them.”

After receiving a brief reply in mid-October from Italian Archbishop Angelo Becciu, the “substitute” or number two official in the Secretariat of State, dated Sept. 7 and confirming that Weinandy’s letter had been placed before the pope, Weinandy provided the text to Crux and other media outlets. 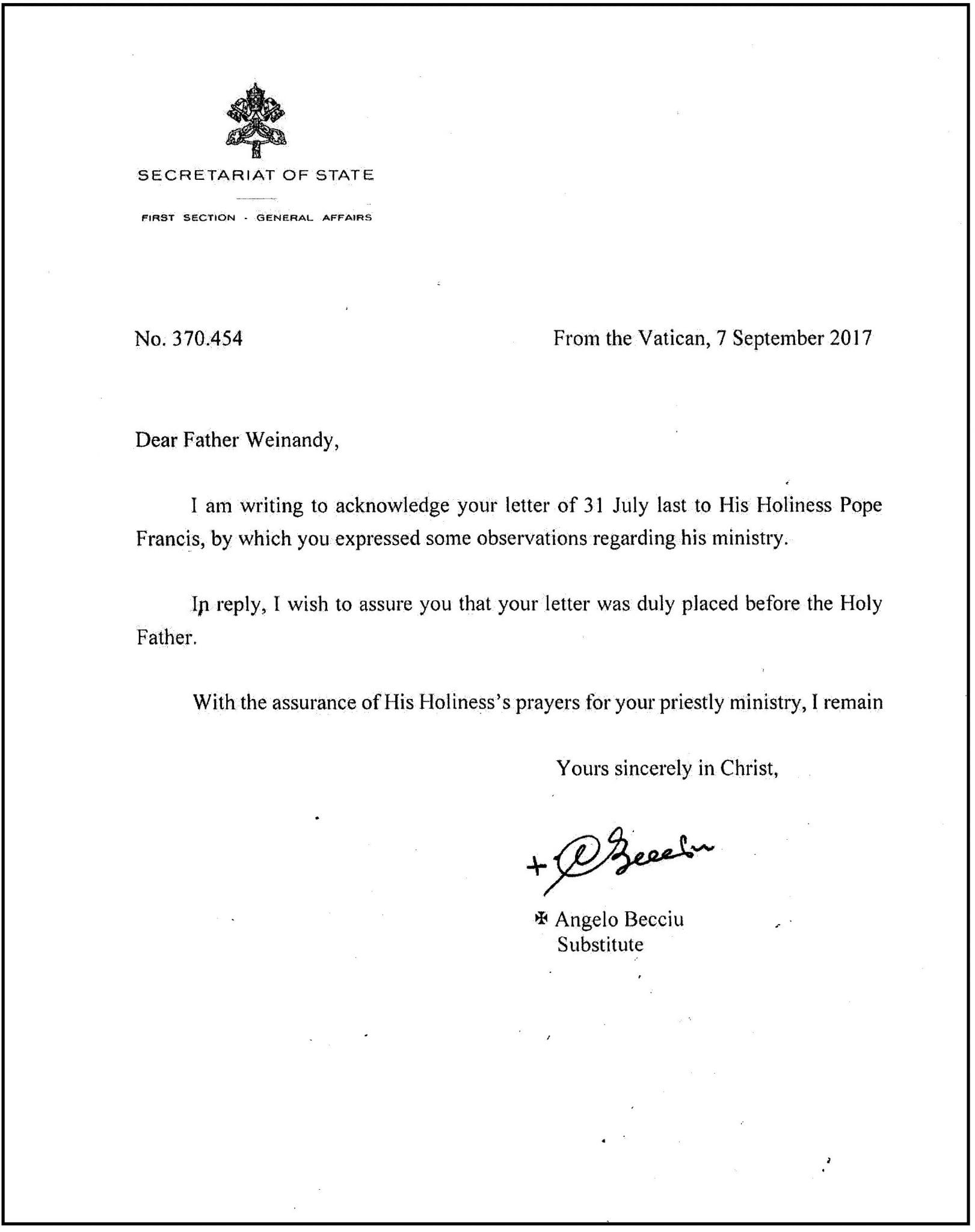 The full text can be read here. In the three-page missive, Weinandy makes five basic points.

First, he tells Francis that in his document on the family, Amoris Laetitia, “your guidance at times seems intentionally ambiguous, thus inviting both a traditional interpretation of Catholic teaching on marriage and divorce as well as one that might imply a change in that teaching.”

“To teach with such an intentional lack of clarity inevitably risks sinning against the Holy Spirit, the Spirit of truth,” Weinandy wrote.

Weinandy also complains that Francis seems “to censor and even mock” those with traditional positions on marriage, styling them as “Pharisaic stone-throwers who embody a merciless rigorism.”

“This kind of calumny is alien to the Petrine ministry,” he said.

Second, Weinandy objects that Francis too often portrays doctrine as “dead and bookish,” and accuses those concerned with upholding doctrine of turning it into an “ideology.”

“But it is precisely Christian doctrine … that frees people from worldly ideologies and assures them they are actually preaching and teaching the authentic, life-giving Gospel,” he wrote.

Third, Weinandy charges, faithful Catholics are “disconcerted” by the appointment of bishops “who seem not merely open to those who hold views counter to Christian belief, but who support and even defend them.”

Faithful Catholics are also demoralized, Weinandy said, when Francis seems “silent” in the face of the “teaching and pastoral practice” of those bishops, whom he does not name, saying such Catholics “are losing confidence in their supreme shepherd.”

Fourth, Weinandy asserts, the kind of decentralization being pushed by Francis undercuts the Church’s unity.

“Encouraging a form of ‘synodality’ that allows and promotes various doctrinal and moral options within the Church can only lead to more theological and pastoral confusion,” he said.

“Bishops are quick learners,” he wrote, “and what many have learned from your pontificate is not that you are open to criticism, but that you resent it,” claiming that many bishops don’t speak out publicly for fear they will be “marginalized or worse.”

In an interview with Crux, Weinandy said his decision to write the letter was not easy, and resulted from what he regards as a moment of inspiration.

It came last May, he said, when he was in Rome for a meeting of the International Theological Commission. He said he spent two different sessions in prayer at St. Peter’s Eucharistic Chapel, struggling to decide if he should speak up. In the middle of a sleepless night, he said, he basically gave God an ultimatum.

“If you want me to write something, you have to give me a clear sign,” Weinandy recalls saying. “Tomorrow morning, I’m going to Saint Mary Major’s to pray, and then I am going to Saint John Lateran.  After that, I’m coming back to Saint Peter’s to have lunch with a seminary friend of mine.”

“During that interval, I must meet someone that I know but have not seen in a very long time, and would never expect to see in Rome at this time.  That person cannot be from the United States, Canada or Great Britain.  Moreover, that person has to say to me, ‘Keep up the good writing’.”

Sure enough, Weinandy said, exactly that happened the next day, in a chance meeting with an archbishop he’d known a long time ago but not seen for over twenty years, who congratulated him for a book on the Incarnation and then said the right words, “Keep up the good writing.”

“There was no longer any doubt in my mind that Jesus wanted me to write something,” Weinandy said.  “I also think it significant that it was an Archbishop that Jesus used.  I considered it an apostolic mandate.”

Weinandy is aware that might sound a little pretentious, but says it’s important to illustrate his motives.

“I wanted to assure myself that if I wrote something, it was not simply because I had concerns, concerns that may be unfounded.  If I did write something, I wanted it to be of help to Pope Francis, to the Church, and to the faithful,” he said.

“So, in a sense, I wanted to gain God’s approval, and not simply rely on myself,” Weinandy said. “I feel the story shows that I’m attempting to be helpful.”

Despite what Weinandy told Francis about a fear of reprisals, he said he’s not alarmed about possible fallout for himself.

“I am more concerned about the good that my letter might do,” he said.

As to why he chose to go public, Weinandy said “the letter expresses the concerns of many more people than just me, ordinary people who’ve come to me with their questions and apprehensions,” and “I wanted them to know that I listened.”

Weinandy also said he has no plans to promote his criticism of Francis beyond the letter.

“I have done what I believe God wanted me to do,” he said.

It remains to be seen if Weinandy’s letter will trigger a similar reaction as the “filial correction.” In that case, critics suggested the theologians were overstepping their bounds.

Italian philosophy professor Rocco Buttiglione, who was a close friend and adviser of St. Pope John Paul II, charged the theologians were trying to stand as “judges over the pope,” while theologian Robert Fastiggi and author Dawn Eden Goldstein argued that the authors of the correction violated a 1990 Vatican document titled Donum Veritatis on the proper role of Catholic theologians, which says they should make reservations known only “in an evangelical spirit and a profound desire to resolve the difficulties.”

In Congo, South Sudan, Pope will see the Church on the frontlines