Wasanthi, a member of Berlington family weeps over the grave of Bevon, who was killed in the Easter Sunday bombings in Colombo, Sri Lanka, Tuesday, April 23, 2019. The six near-simultaneous attacks on three churches and three luxury hotels and three related blasts later Sunday were the South Asian island nation's deadliest violence in a decade while Sri Lanka police arrested 40 suspects in the wake of a state of emergency that took effect Tuesday giving the military war-time powers. (Credit: Eranga Jayawardena/AP.)

The dark wooden coffins, sitting side by side, attested to one family’s unspeakable grief.

COLOMBO, Sri Lanka — The dark wooden coffins, sitting side by side, attested to one family’s unspeakable grief.

The Gomez family gathered Tuesday to say a final farewell to five loved ones — a son, a daughter-in-law and three young grandsons — brutally killed as they attended Easter Sunday Mass at Colombo’s St. Joseph’s Shrine.

“All family, all generation, is lost,” said Joseph Gomez, the family patriarch, as tears welled in his eyes. Dozens of family members and neighbors were gathered in his simple home, where the sound of hymns sung by mourners gently wafted in the background and candles flickered beside three coffins. The bodies of two grandsons have yet to be recovered.

Across Sri Lanka, Tuesday was a national day of mourning as families began to lay to rest the more than 320 victims of the bomb blasts that struck a half-dozen churches and hotels in the island nation.

For the Gomez family, the loss was unfathomable: A 33-year-old son, Berlington Joseph, the young man’s 31-year-old wife Chandrika Arumugam, and their three boys, 9-year-old Bevon, 6-year-old Clavon and baby Avon, who would have turned 1 next week. A funeral card with a photo of the family clutched in his hands, the elder Gomez wailed: “I can’t bear this on me, I can’t bear this.”

“My eldest son, my eldest son,” he sobbed as he laid bouquets of red roses and brightly colored daisies on the largest coffin. Next to it was a tiny coffin, a photo of little Avon tucked into a wooden frame nearby.

The coffins, draped with long white tassels, were then carried to a Colombo cemetery and lowered into side-by-side graves.

At St. Joseph’s Shrine, dozens of mourners gathered outside, lighting candles and praying in unison for the victims of Sunday’s blasts as heavily armed soldiers stood guard. 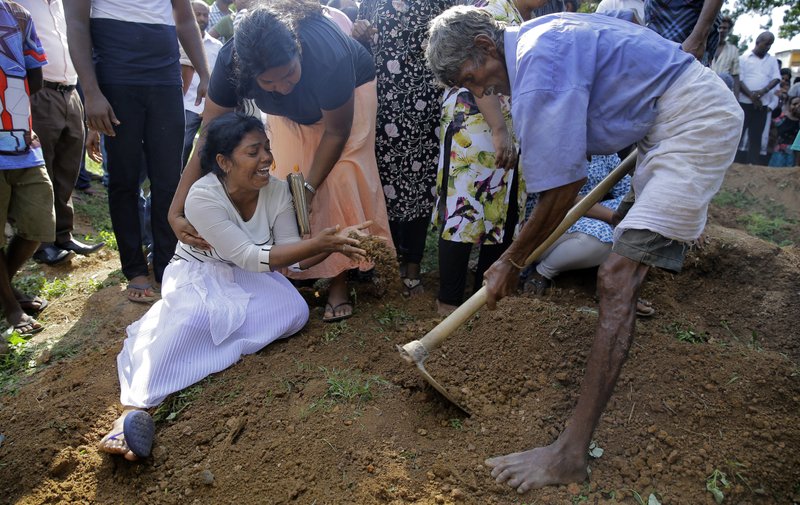 Wasanthi, a member of the Gomez family weeps over the gave of 9-year-old Bevon, who was killed in the Easter Sunday bombings in Colombo, Sri Lanka. (Credit: Eranga Jayawardena/AP.)

At St. Sebastian Church in Negombo, a funeral service was held Tuesday for victims killed there as they worshipped, led by Cardinal Malcom Ranjith. The church was heavily guarded by hundreds of army, air force and police troops, and soldiers were deployed every 15 feet along the streets of the city some 20 miles north of Colombo.

Throughout the country, people observed a three-minute silence for the victims of the near-simultaneous attacks at three churches and three luxury hotels, and three other related blasts, the deadliest violence to strike Sri Lanka in a decade. 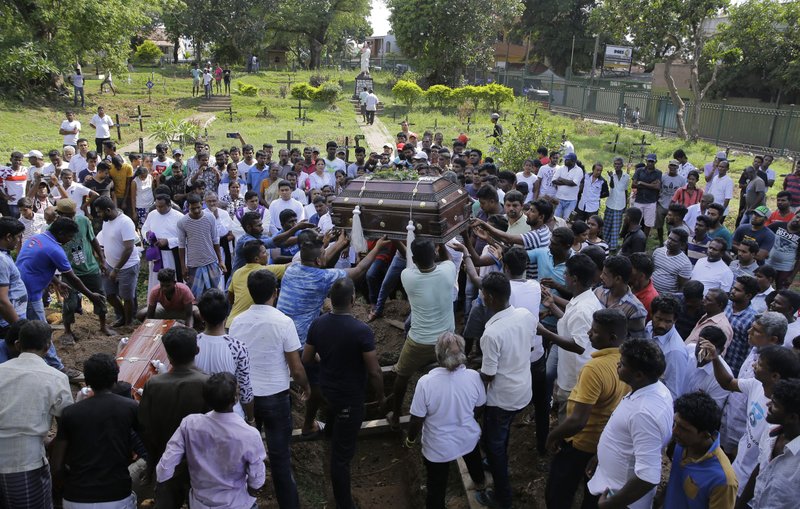 The coffins of three members of the Gomez family are carried for burial in side-by-side graves in Colombo, Sri Lanka. The family lost five loved ones in the Easter Sunday bombings. (Credit: Eranga Jayawardena/AP.)

The Sri Lankan government has blamed the attack on National Towheed Jamaar, a little-known local Islamic extremist group, and on Tuesday, the Islamic State group also claimed responsibility, though it provided no proof it was involved and has made unsubstantiated claims in the past.