An elderly Sri Lankan Muslim woman walks past a Buddhist shrine in Colombo, Sri Lanka, Thursday, May 2, 2019. Catholic services are being canceled for a second weekend in Sri Lanka's capital after the government warned of more possible attacks by the same Islamic State-linked group that carried out Easter suicide bombings. (Credit: Eranga Jayawardena/AP.)

Sri Lanka’s Catholic cardinal received “foreign information” that attempts would be made this week to attack a church and another church institution, according to a letter he sent Thursday to church officials that later appeared on social media.

COLOMBO, Sri Lanka — Sri Lanka’s Catholic cardinal received “foreign information” that attempts would be made this week to attack a church and another church institution, according to a letter he sent Thursday to church officials that later appeared on social media.

Cardinal Malcolm Ranjith, the archbishop of Colombo and an outspoken critic of the Sri Lankan government’s apparent failure to act on Indian government intelligence ahead of the Easter attacks, said in the letter that he was closing churches and Catholic schools throughout Sri Lanka and canceling public congregations for Mass “until further notice.”

“For your own good, we have decided to close down those institutions,” he wrote.

Church spokesman Father Edmund Thilakaratne in an interview confirmed the authenticity of the letter to The Associated Press but declined to disclose further details, including the source of the foreign information.

An Islamic State-linked group of Sri Lankan nationals carried out coordinated suicide bombings on Easter Sunday at three churches and three luxury hotels on the island that killed 257 people.

Earlier Thursday, Tillakaratne had said that Ranjith canceled all Sunday services for a second week in the diocese based on the latest security reports.

Last week, Muslims were told to stay home for Friday prayers and all of Sri Lanka’s Catholic churches were closed. Instead of the usual Sunday Mass, Ranjith delivered a homily before clergy and national leaders at his residence that was broadcast on television. 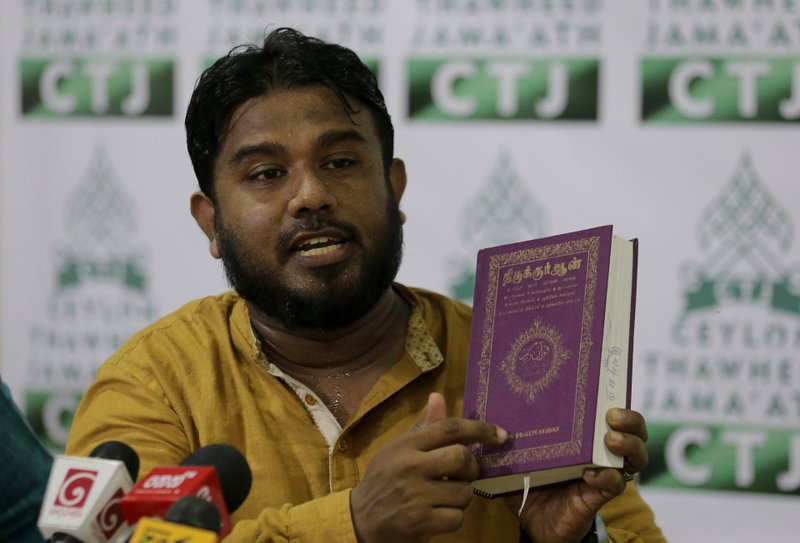 Sri Lanka’s Muslim leaders, however, were encouraging Muslims to return to mosques for Friday prayers, according to N.M. Ameen, president of the Muslim Council of Sri Lanka.

Ameen said the security situation seemed to have improved, though the group had asked the government for additional protection.

Officials have warned that suspects linked to the bombings are still at large.

A Cabinet minister said Tuesday that intelligence warnings had indicated government ministers could be targeted by the same group, which pledged its loyalty to Islamic State militants.

The death toll from the April 21 bombings at churches and luxury hotels rose to 257 people from 253 last week, Health Ministry chief Dr. Anil Jasinghe said Thursday. He said 47 people were still being treated in hospitals, including 12 in intensive care.

Pakistan Foreign Minister Shah Mehmood Qureshi postponed a trip this week to Sri Lanka because of security concerns, a senior foreign ministry official said on condition of anonymity because he wasn’t authorized to speak to reporters.

The U.S. Embassy in Colombo remained closed to the public through Friday.

Sri Lankan police late Wednesday released the names and photographs of nine alleged suicide bombers who carried out the Easter attacks, all belonging to an offshoot of a local group called National Towheed Jamaat. They included extremist preacher Mohamed Zahran, also known as Zahran Hashim, who was described as the attack leader, and the wife of another suicide bomber, who blew herself up, along with her children and three police officers, at a villa belonging to her father-in-law, who is a prominent spice trader.

Also on Thursday, the bodies of 10 suspected militants killed in a gun battle with security forces and subsequent explosion at a safe house in Sri Lanka’s Eastern province last week were buried without any religious rites.

All Ceylon Jamiyyathuul Ulama, a group of Muslim clerics, had demanded that authorities show the suspected terrorists the “maximum punishment.”

The six children whose bodies were recovered from the safe house were accorded religious rites, however.

Police suspect that Zahran’s father and two brothers, Rilwan and Sheini, were among the 16 killed at the safe house, according to spokesman Ruwan Gunasekara.

Zahran’s wife and daughter sustained injuries from the blast, but their medical condition was not immediately clear.

With the atmosphere still tense in Colombo, Sri Lankan Islamic group Ceylon Thawheed Jama’ath appealed to reporters for help on Thursday clarifying that it was not connected to National Towheed Jamaat.

The group’s general secretary, Abdur Razik, said there were many groups in Sri Lanka with names that include the words “Thawheed Jama’ath,” which roughly translates to “monotheism organization.” Razik’s group is among several that have organized news conferences to clear their names after being confused in news reports with the group accused of carrying out the bombings.

to keep delivering the best in smart, wired and independent Catholic news.