Indigenous march past the Cathedral in Brasilia, Brazil, Wednesday, June 23, 2021. Indigenous activists have traveled to the capital to demand government action to halt illegal mining and logging on their land and oppose a proposed bill they say would limit recognition of tribal lands. (Credit: Ricardo Mazalan/AP.)

Hundreds of Indigenous people gathered outside Brazil’s Congress on Wednesday to push for rejection of a bill that could loosen protections for their lands — a proposal that has already prompted clashes with police.

BRASILIA, Brazil — Hundreds of Indigenous people gathered outside Brazil’s Congress on Wednesday to push for rejection of a bill that could loosen protections for their lands — a proposal that has already prompted clashes with police.

Indigenous groups have been staging protests for days in the capital. Dressed in traditional clothes and carrying bows, they marched to Congress, where they sang and danced. A group of women gave roses to police officers standing guard. The prior day, police used tear gas to disperse the protesters, who shot arrows; one pierced an officer’s leg.

The bill before the lower house’s Constitution and Justice Committee would require Indigenous people seeking full protection of their territories to have been occupying the land in 1988, the year Brazil’s constitution was signed after the nation’s return to democracy. The committee approved the bill late Wednesday, paving the way for it to proceed to the floor for a vote.

Indigenous rights activists say the cut-off date ignores the fact many had been forcibly expelled from their ancestral lands, particularly during the military dictatorship, or may not have formal means to prove possession.

There are currently 237 such requests for full protection of territories, most small and located outside the Amazon rainforest in Brazil’s north region, according to Juliana Batista, a lawyer at the nonprofit Socioenvironmental Institute.

“It is a big conflict because they’re in areas within contexts of real estate speculation, cities, and very much pressured by economic interests,” Batista said by phone. “If they can’t prove they were in possession, they could lose their lands.” 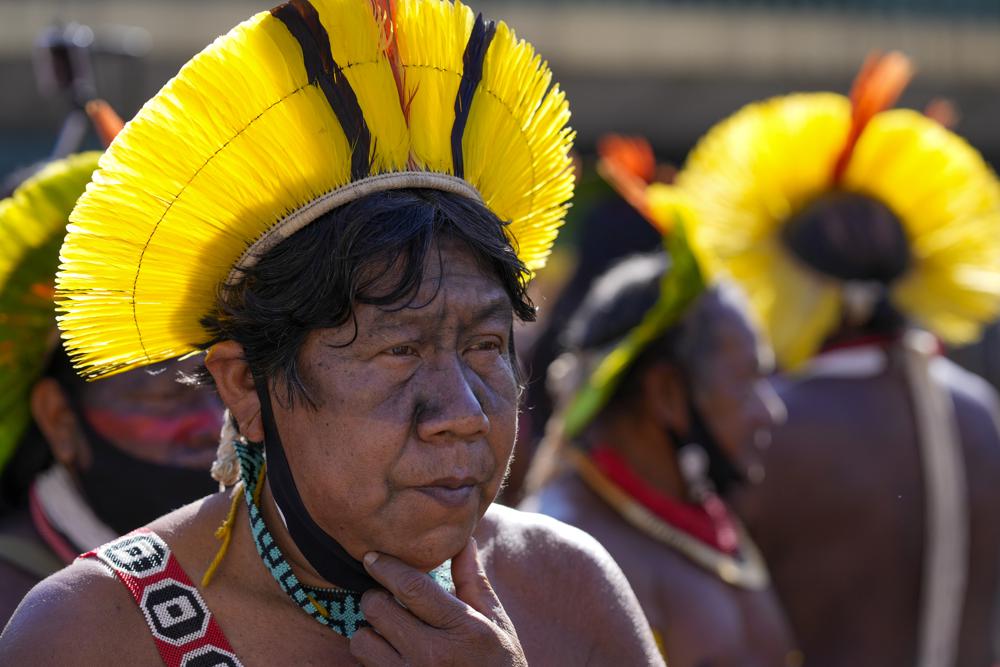 An Indigenous leader protests outside Congress in Brasilia on Wednesday. (Credit: Ricardo Mazalan/AP.)

The bill’s backers argue it would provide legal certainty to agricultural producers, a key constituency of Brazil’s conservative President Jair Bolsonaro. He has said Indigenous people control far too much territory relative to their population – their territories cover 14 percent of Brazil, most in the Amazon – and he has been outspoken about his desire to promote development.

“Brazil has enormous potential within that 14 percent, that enormous area of our Indigenous brothers,” he said in a broadcast on social media in April, while highlighting the country’s multitude of agricultural crops. 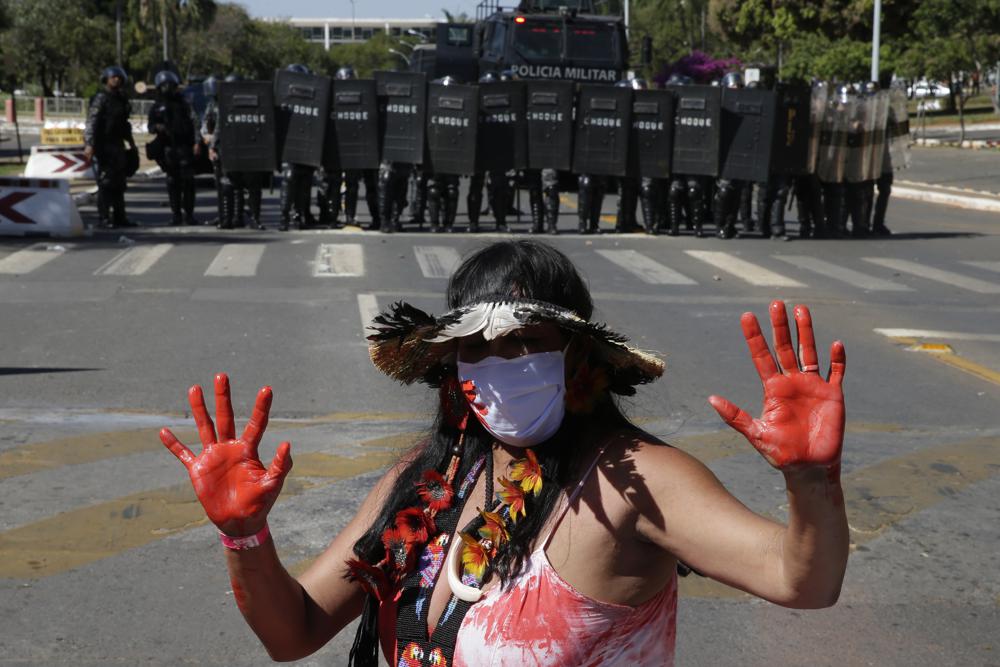 An Indigenous woman stands in front of a formation of riot police blocking a road outside Congress. (Credit: Eraldo Peres/AP.)

Indigenous demonstrators in Brasilia strove to show they were indeed opposed to any changes that could strip them of their rights.

The bill also would allow the government to appropriate so-called Indigenous reserves demarcated prior to 1988 if the groups’ cultural features have changed. That could potentially apply to more than 60 areas totaling roughly 1,500 square miles, which are home to around 70,000 people, according to the institute.

“The bill attacks lands already approved and demarcated and opens space for illegal mining and deforestation if it’s approved,” Kretã Kaingang, an Indigenous leader from Brazil’s southern region, said in an interview. “It attacks all of our rights.”

Indigenous demonstrators earlier on Wednesday circled around a giant speaker to listen to the congressional committee’s proceedings. They said clashes on Tuesday began when they tried to move out of the blasting sun and into a shaded area. 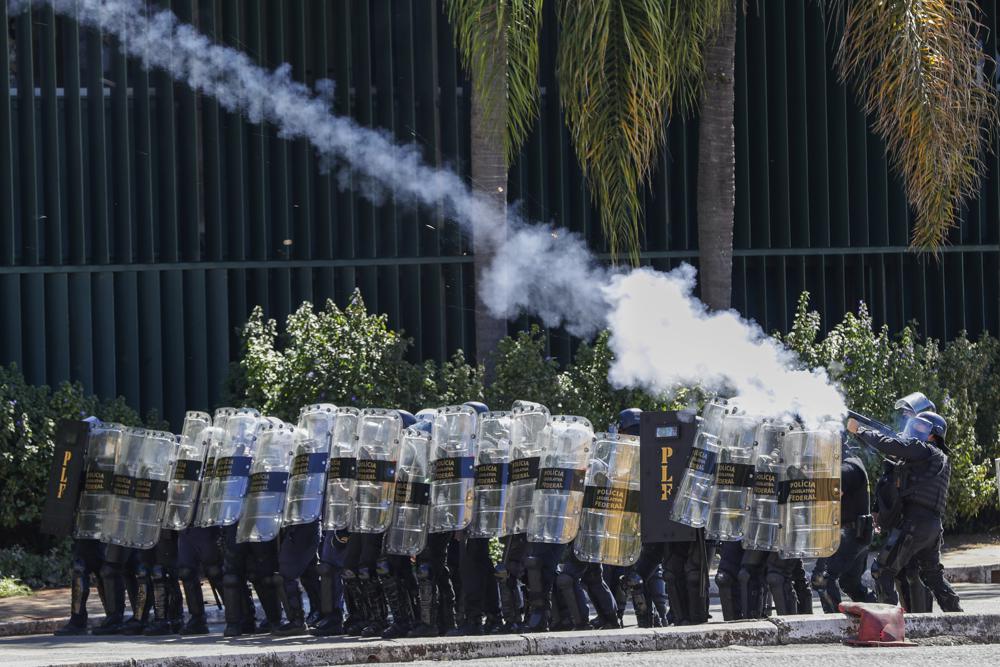 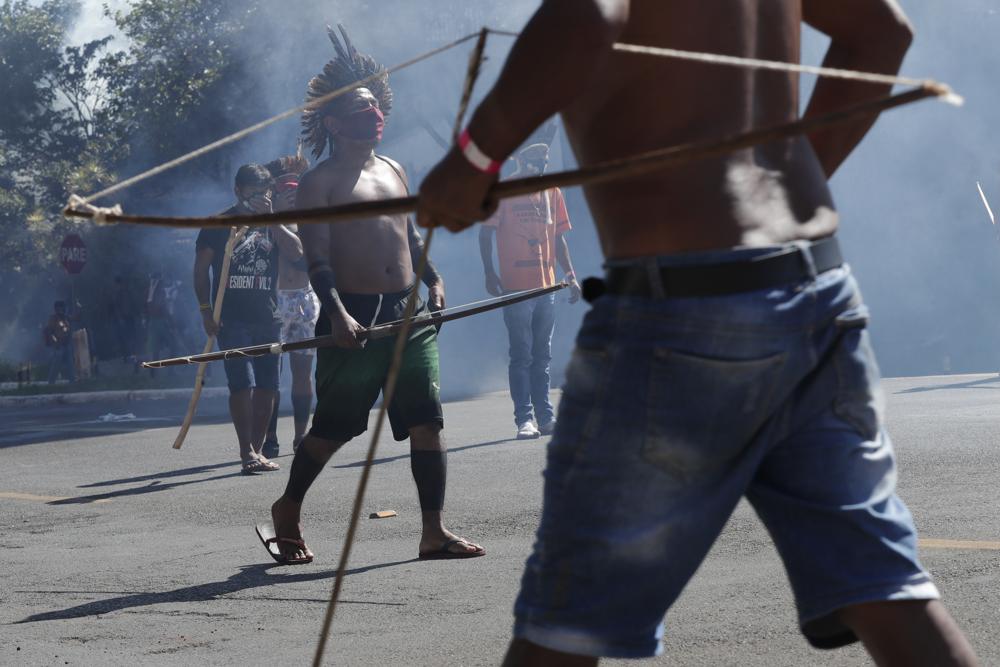 Indigenous armed with bows and arrows clash with police during a protest on Tuesday. (Credit: Eraldo Peres/AP.)

“For decades we have faced … miners’ invasions, violence, leaders being killed,” said Dinamã Tuxá, an Indigenous leader from northeastern Bahia state. “And then we arrive to denounce precisely what is going on inside our territories and we face the same situation.”

The country’s Supreme Court in the past has ruled against efforts to open Indigenous territories to business interests, ruling the reserves are off limits to commercial development.

Sign up to get the latest Catholic news and stories delivered right to your inbox.